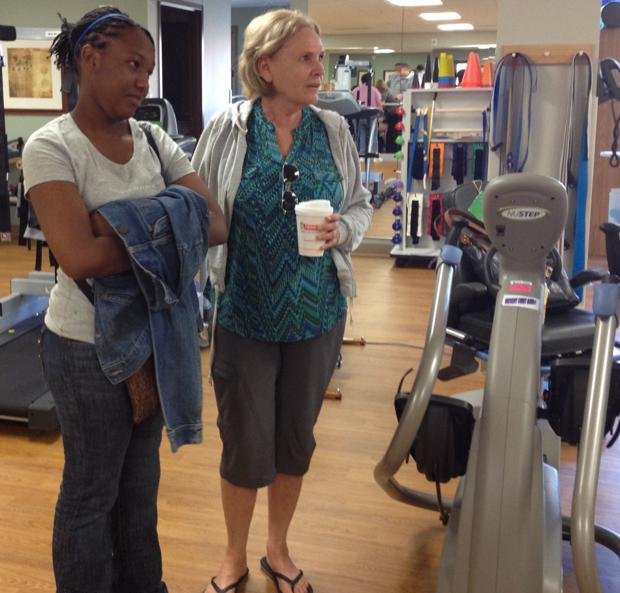 Joverly Charles, 15, of Port-au-Prince, Haiti, is in Davenport for two to four weeks to receive a new prosthesis and physical therapy. She is accompanied in Davenport by Judy Foster, a mission worker in Haiti. Joverly lost her leg in the country’s 2010 earthquake.

A 15-year-old girl from Haiti is a patient at Genesis Health System today, getting a new prosthesis for the leg she lost in her country’s 2010 earthquake.

In the 24 hours she’s been in the Quad-Cities, Joverly Charles has, so far, visited NorthPark Mall and spent three hours in a grocery store.

But her main task is at Genesis, where three partners joined forces to fit her for a new limb and provide rehabilitative therapy.

Joverly, who speaks only French, was part of a news conference early Monday at Genesis Physical Medicine and Rehabilitation, located at the hospital on West Central Park Avenue, Davenport.

She is accompanied by Judy Foster, an American mission worker in the capital city of Port-au-Prince. Foster has lived in Haiti for 25 years, and she served as interpreter for the media event.

She also revealed that she is one of Joverly’s supporters. Foster has known Joverly’s family for 20 years. As a mission worker, she helps Haitian children, including those who need medical care.

Shani Marland, a nurse at Genesis, was in Haiti on a mission trip and met Foster. Foster asked Marland to help Joverly, and the nurse ended up contacting several organizations for aid.

These include the rehabilitation therapists at Genesis, American Prosthetics, Davenport, and Ossur Prosthetic Solutions.

After she is fitted with the new prosthesis, physical therapists will work on Jovery’s walking gait, a process that is expected to take two to four weeks to complete.

In Haiti, Joverly lives in Port-au-Prince with her family, in a home built after the earthquake. She goes to a private school, Foster said.

But five years ago, she was a young girl when the earthquake occurred on Jan. 12, 2010. She was walking home when a concrete wall collapsed on her leg.

According to Foster, Joverly’s father traveled 150 miles with her, to find medical help near the nation’s border with the Dominican Republic. It was a chaotic time, and doctors were unable to save the leg.

Her first prosthetic was made in the Dominican Republic, but Joverly has outgrown it. She is in pain and unable to walk correctly.

Foster said there are many Haitian children who lost limbs in the disaster. Some of them, like Joverly, have a prosthetic, but many do not.

Joverly’s experience in Davenport will include more than time in a hospital. Marland said Joverly will see tourist sites: A Channel Cat riverboat trip is planned, as is a visit to the Figge Art Museum and its Haitian art exhibit. She will also see the Quad-Cities River Bandits play baseball.