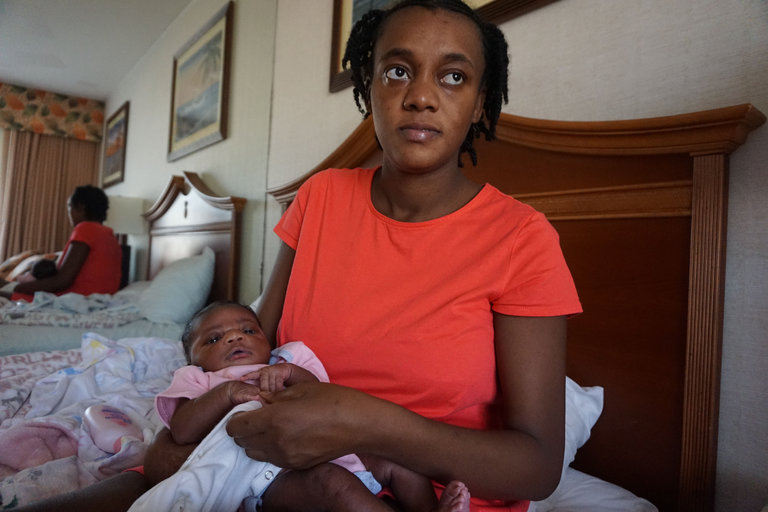 The policy change, announced last week, has separated wives from husbands and children from their fathers, stranding the men in Mexico after their families were allowed to cross into the United States.

“I’m hoping God makes miracles,” said Sandra Alexandre, who was allowed into the United States last week ahead of her boyfriend and gave birth three days later. The new policy went into effect right before the child’s father could cross.

The family separations appear to be an unintended consequence of the Obama administration’s effort to tighten the border against the arrival of thousands of Haitians streaming north from Brazil, mostly to seek employment in the United States.

Until the change, the United States had been allowing Haitians without visas to enter under a temporary humanitarian parole, a special concession owing to the social, economic and political troubles facing Haiti after the devastating 2010 earthquake. But on Sept. 22, amid a surge in Haitians from Brazil, the Obama administration said it was resuming the deportation of Haitians who presented themselves at border crossings without immigration documentation.

The policy change effectively shut the door on newly arriving undocumented Haitians, including men whose partners and children had already been admitted.

Immigrant advocates in San Diego said they had identified more than 50 families in that city alone who had been separated by the policy change, and they have appealed to Homeland Security officials to help reunite the families in the United States.

“The bottom line is that this was not a well-conceived policy,” said Andrea Guerrero, executive director of Alliance San Diego, a group that has been helping Haitians who have arrived from Brazil in recent months. “It seemed to have come down from one day to the next without a clear understanding of what was going on and what kind of impact it would have.”

The Department of Homeland Security did not immediately reply to written questions about the effect of the policy change.

Amid the surge, the American border authorities had been using an appointment system to process arriving Haitians. They had been giving priority to women and children, who received earlier dates rather than being forced to spend weeks in the overcrowded shelters. Men, no matter if they were traveling with their partners and children, usually had to wait for later appointments.

Ms. Alexandre, 24, arrived in the border city of Mexicali with her boyfriend, Volcy Dieumercy, 29, on Sept. 20 after a 10-week trip from Curitiba, Brazil. She was pregnant and nearing her due date.

Because of her pregnancy, Mexican officials, who have been scheduling the migrants’ appointments with American border officials, granted Ms. Alexandre an appointment for last Thursday, but they denied the couple’s request that Mr. Dieumercy be processed on the same day, the couple said. Instead, he was given an appointment for Sept. 30, forcing him to wait in Mexicali. 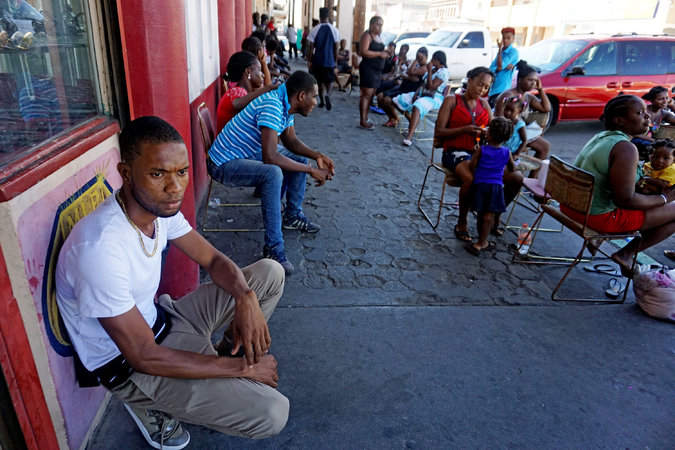 Volcy Dieumercy, the father of Ms. Alexandre’s baby, outside a shelter in Mexicali, Mexico, on Wednesday. He has not been allowed to enter the United States. Credit Sandy Huffaker for The New York TimesMs. Alexandre entered under a three-year humanitarian parole, and she made her way to a migrant shelter in San Diego. She soon learned that Mr. Dieumercy had been barred from entering under the new policy.

On Sunday, she went into labor and was admitted to the hospital. A volunteer working with Alliance San Diego called Mr. Dieumercy so the couple could speak. The volunteer remained in touch with Mr. Dieumercy throughout the birth using WhatsApp, updating him on Ms. Alexandre’s progress.

The couple had intended to travel together to Orlando, Fla., and live with Mr. Dieumercy’s relatives. Ms. Alexandre said she had no idea what she would do if Mr. Dieumercy was not allowed into the country.

“I haven’t thought that far ahead,” she said from the hospital earlier this week before being discharged. “Right now, I’m only thinking positively.”

Mr. Dieumercy is equally uncertain. He knows that if he tries to cross at an official American port of entry, he will probably be deported.

“I need my family,” he said in a text message from Mexicali. “I can’t wait any longer. I’m very sad.”

Sinskya Cetoute, a Haitian immigrant, said that she, her husband and their 4-year-old daughter had gone to the San Ysidro border crossing between Tijuana and San Diego last Friday, a day after the new policy went into effect. Immigration officials quickly separated them, with Ms. Cetoute, 33, and her daughter taken in one direction and her husband in another.

Ms. Cetoute and her daughter were allowed into the United States on humanitarian parole, with permission to stay for three years, but she has not heard from her husband since she last saw him. “We don’t know what we’re going to do,” she said. “I can’t live without the father of my daughter.”

In announcing the policy change last week, American immigration officials said they hoped it would discourage Haitians from making the grueling trek to the United States border. But shelter administrators and migrant advocates along the route report that many Haitians continue to move north through the Americas, undeterred by news of the full resumption of deportations in the United States.

Marcelo Pisani, the International Organization for Migration’s regional director for Central America, North America and the Caribbean, said that migrants from outside the region were arriving at the Panama-Costa Rica border at an average rate of 90 to 110 per day. He said “a significant percentage” were Haitians.

Mr. Pisani said it was “very probable” that with the humanitarian door closed, more Haitians arriving at the United States’ southern border would seek asylum.

In Tijuana, which has received thousands of Haitian migrants this year, a steady stream of Haitians are still arriving each day. Many of them, though aware of the policy change, are presenting themselves at the border only to be put immediately into fast-track deportation proceedings, advocates said.

1 thought on “Haitian Men Cut Off From Families as U.S. Tightens Entry Rules”