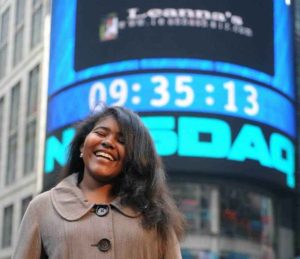 Leanna Archer is one of dozens of people taking part in the Women in Production trade fair and marketplace at the Miami Beach Convention Center this weekend. She’s 15.

Haitian-American Leanna Archer was nine years old when she was bitten by the entrepreneurial bug.

Now at 15, she is chief executive of Leanna’s Inc., a hair products company that is expected to gross around $600,000 this year and offers 14 products. Her wares are among the handcrafted products on display at “Women in Production,” an artisanal fair featuring Haitian and Haitian-American women at Miami Beach Convention Center. The two-day event is open to the public Sunday from 10:30 a.m. to 6:30 p.m.

It all started with Archer’s great grandmother’s secret formula for hair pomade, which includes oils and essences of avocado, sweet almond, rosemary and hibiscus.

When she was little, people in her Islip, Long Island community kept asking her, “What does your mother put on your hair?” It tamed her curls and made the hair shiny but didn’t weigh it down.

“Whenever my great grandmother sent a shipment from Haiti, I put it in Gerber baby food jars and shared it with people,’’ the teenager said. “But then orders started coming in. My mother had a full-time job, so I decided to do it myself. I’ve always had a tenacious personality.’’

“Leanna knows what Leanna wants and she figures out how to get it,’’ said Maritza Valcourt-Archer, her mother.

The business has blossomed so much that four years ago her father quit his job to help her out.

Plus, Leanna was getting invitations to appear at forums like “What Makes a Young Champion?” in Singapore and couldn’t travel alone, said Valcourt-Archer.

Now Leanna’s Inc. has become something of a family business with relatives and friends pitching in when Leanna needs help, said her mother.

Leanna still imports the essential oils she uses from Haiti. Once she tried getting them from Hawaii. her customers could tell the difference, she said, and she stopped.

Last year revenue topped $100,000, but so far this year sales have more than quadrupled after Leanna’s began selling internationally, said the teen entrepreneur.

Archer has the distinction of being the youngest entrepreneur ever to ring the NASDAQ opening bell and has been interviewed by network TV as well as profiled in magazines such as Forbes, Inc. and Ebony.

One of those Leanna has motivated is her grandmother, Evelyne Valcourt-Romane. Her mother Emma — the same woman who supplied the formula for Leanna’s hair pomade — was famous for making teas from organic herbs. Valcourt-Romane carried on the family tradition.

Now Valcourt-Romane has a line of bottled teas — ginger lemon, red rosebud and hibiscus — called Emma’s Deity that she had on display at the “Women in Production” fair.

The event, which is organized by the Haitian nonprofit Femmes en Démocratie and the Haitian American Chamber of Commerce of Florida, is designed to revive the creative industries of Haiti after last year’s earthquake and to increase production among women of the Haitian Diaspora.