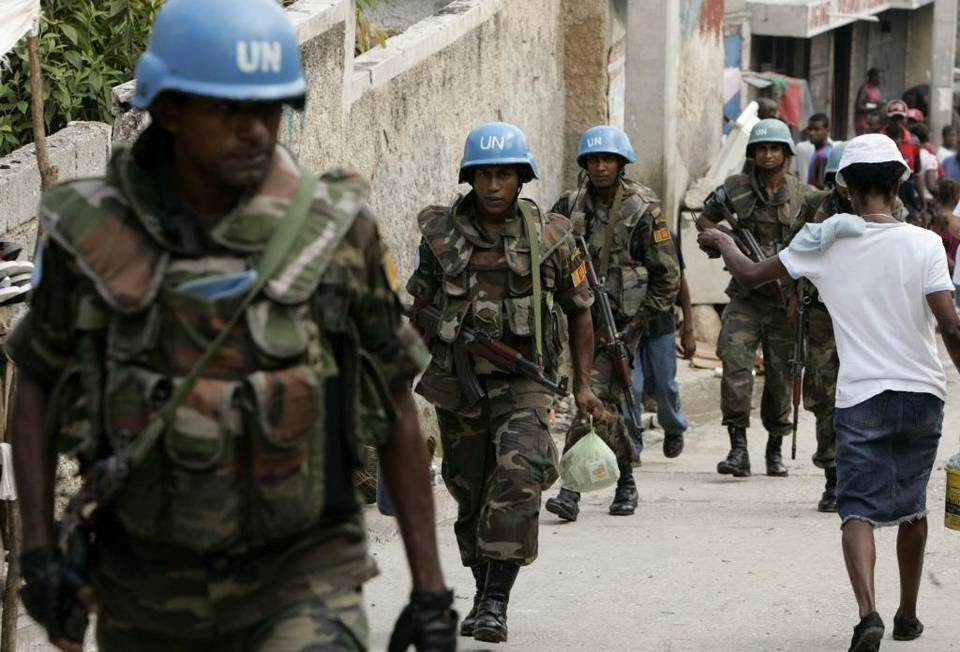 After nearly 13 years of calming the slums, cracking down on armed gangs and providing vital military backup to Haiti’s national police around the country, the United Nation’s multinational military force is on its way out. And some Haitian lawmakers want it replaced with their own homegrown army.

“Definitely, the military component is not necessary anymore,” Hervé Ladsous, the U.N. secretary-general for peacekeeping, told the Miami Herald. “Stability is essentially there. Look at the elections at the end of last year. There were incidents, yes, a few, but nothing really serious, and I think nothing that justifies the prolonged stay of regular troops.”

Ladsous plans to recommend ending the military component of the $346-million-a-year stabilization mission in a report to Secretary-General Antonio Guterres that will be sent to the Security Council. He came to the conclusion after leading an assessment here last week on the future of the U.N.’s presence in the country. Among those he met with: political party leaders, parliamentarians and newly-sworn in President Jovenel Moïse.

“I think he is all for strengthening our work together,” Ladsous said of Moïse, who would be the first Haitian president to govern without the U.N.’s heavy militarized presence since peacekeepers arrived in 2004 during a bloody coup that toppled then-President Jean-Bertrand Aristide. “There is work to be done, but it’s primarily by the Haitians themselves. … We are very much ready to support, and we will remain perfectly ready to mobilize.”

During the discussions, Ladsous said that no one objected to the proposed departure of the blue-helmet peacekeepers. Though the international forces helped restore order for more than a decade, the soldiers also have been tied to sexual abuse allegations and a cholera epidemic that has killed more than 9,400 and sickened more than 802,000.

He did, however, hear from the presidents of both chambers of parliament about how Haiti plans to replace the U.N. Stabilization Mission’s 2,370-strong military force once it has withdrawn. This is the U.N.’s seventh mission in Haiti since 1994, and critics say the effort has resulted in little progress.

“We are demanding three things from the end of this mission,” Haitian Senate President Youri Latortue told the Herald.“The first aspect is to reinforce the democratic institutions … reinforce justice in this country. The second is to help professionalize the police, and third, we, Haiti, have to put in place our own army.”

A former solider in the Forces Armées d’Haiti or FAdH, as it’s commonly known, Latortue is building support for the military’s full return.

“In Haiti, we are used to having an army,” he said, citing more than 75 years of military presence that started in 1915 with an American occupation. “But the Americans understood that if we have the police but not an army, we will not get anywhere.”

Lower Chamber of Deputies President Cholzer Chancy, who also attended the meeting and is under consideration for prime minister, said that it’s time for Haiti to take charge of its destiny.

“Whenever there is a disaster, who comes? It’s always the Dominican army, the American army, the armies of our neighbors,” Chancy said. “We have to organize ourselves, respect the Constitution … and have an army that is apolitical and more professional than it was.”

This is not the first time the idea of re-mobilizing Haiti’s army to replace departing U.N. troops has surfaced. Former President Michel Martelly promoted the idea during his 2010 presidential bid. And while he never managed to get the 3,500 troops he promised, he did use his executive powers in October 2015 to re-mobilize the disbanded Forces Armées d’Haiti with a handful of members.

“The army is already there,” said Latortue, referring to the 25 officers and 125 soldiers who were recruited under Martelly and trained in Ecuador. “It simply needs to be reinforced.”

Ladsous told the Miami Herald that having an army is a sovereign decision, not to be made by outsiders. But in his meeting with Latortue — during which he stressed the need to strengthen the Haiti National Police — Ladsous questioned whether Haiti needed an army.

“The country is under no external threat. There is threat from trans-national criminals, from narco-traffickers, but that is not something that necessarily needs an army to be handled. The police can be called into play in all this,” Ladsous said. “I also don’t think the international community … will look with very much excitement on the idea of recreating a military institution. We know the past.”

The international community, including the United States, has spent billions of dollars over the past 20 years to beef up the Haiti National Police force, which collapsed under political interference a year after the previous U.N. peacekeeping mission departed in 1999, while also demobilizing and reintegrating ex-Fadh soldiers.

Ladsous said Haiti needs stability so it can modernize its 200-year-old laws, work on a functioning judiciary and clear up the legislative backlog to create a framework conducive to investments and job creation.

“It’s only if you can create a legal framework that is welcoming to the investor, domestic or foreign, that you can expect real development to happen,” Ladsous said. “And that is the best guarantee for stability of a country in the long term. You can’t have development without peace and you can’t have peace without development.”

Bill O’Neill, a human rights attorney and director of the Brooklyn-based Conflict Prevention and Peace Forum, said that Haiti needs “a solid, well-trained and funded police service that is deployed nationally and fully accountable to the population it is meant to serve.”

“Armies are not good at policing,” he said, recalling the Haitian army’s reputation as one of the hemisphere’s worst human rights abusers before Aristide disbanded it in 1995. “The result is massive human rights violations, which Haiti experienced all too often when it had an army.”

While Latortue and others insist that Haiti can afford to pay for an army as well as a police force, critics of the idea note that the country already suffers from a severe budget deficit, and that Haiti’s economy grew by only 0.8 percent last year. The police’s $132.5 million budget for this year comes in large part from foreign donors and hardly meets its needs.

“An army on the cheap,” O’Neill said, “would lead to predictable corruption and abusive behavior.”

Ladsous, who is still ironing out the details of a scaled-back mission for the U.N. in Haiti, says the main priority is to continue making the Haiti National Police “a solid institution” with enough officers to be deployed across the territory. The force is expected to have about 15,000 members for a population of 11 million, a ratio far below that of most countries.

Still, he said, he was impressed with the strides the force was making under Police Chief Michel-Ange Gédéon and his top brass.

“I definitely get the sense that they are moving up the curve, and not only through our efforts, but also because there is a real sense of ownership. There is also a sense of pride,” Ladsous said.

Ladsous’ recommendations are due in March. It will be up to the Security Council when it meets in April in Haiti to decide the future of the U.N. force’s presence.

“The priority now is to re-profile the mission, so it will be a different mission but that doesn’t mean six months further down the road we will be leaving,” he said. “We have invested a lot over the years in Haiti. There is still work to do. … My recommendation is definitely not to shut the door six months down the road.”