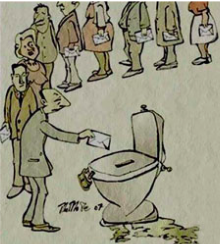 By Kevin Moran and Azadeh Shahshahani

Haiti’s sham election on Aug. 9, 2015 was characterized by extremely low voter turnout, with just 18 percent of registered voters going to the polls.  Additionally, 23 percent of all votes were never counted, due to fraud and violence on Election Day.  By comparison, in the deeply flawed 2010 election, the number of uncounted tally sheets was 12 percent.

The Martelly government, his PHTK party, and the Provisional Electoral Council (CEP) nevertheless declared the electoral process to be broadly satisfactory and minimized the extent of irregularities.  The West, led by the U.S., also blessed this outcome.

In the opinion of the U.S. ambassador to Haiti, Pamela Ann White, results of the first round of legislative elections were acceptable, even if there was violence and irregularities.

The widespread knowledge that the U.S. and the West would put their stamp of approval on the process, no matter how flawed, opened the door to the irregularities that plagued Election Day. According to a published report: “A Haitian observation mission led by a network of human rights organizations (RNDDH), which had more than 15 times the number of observers as the OAS and the EU, denounced the process as an assault on democracy….”Be wary of anyone saying that everything went well,” the group warned.”

The security lapses, violence, disorganization, and irregularities of the August 9 Haitian elections had been preordained by the U.S. subversion of these long overdue elections. The result has been further destabilization of Haiti.

The history of Haiti is marked by the heavy-handed intervention of the U.S.  This includes the 19-year occupation of the country by U.S. Marines in the early 20th century and the U.S.-backed coup in 2004 that overthrew Jean Bertrand Aristide, Haiti’s first democratically elected president.  Haiti has been occupied by U.S.-backed U.N. soldiers for more than a decade.

The Haitian government has been further destabilized by U.S. political interference.  After Jean Bertrand Aristide was re-elected President in 2000 (by 90 percent of the vote), the U.S. imposed a development assistance embargo on Haiti, holding up over $200,000,000 in aid.  The U.S. government financed Haitian organizations that were working to undermine and overthrow the Haitian government.  On February 29, 2004, Aristide was forcibly removed and sent to exile in Africa on a U.S. government plane.  The U.S. replaced the constitutional government with an unelected prime minister flown in from Florida.

The U.S. undermined Haiti’s democracy by providing political and financial support to unlawful parliamentary elections in Haiti held in April and June 2009.  The 2009 elections illegally excluded several political parties, including Haiti’s largest political party, Fanmi Lavalas.  The impact was equivalent to holding a U.S. election without either the Republican or Democrat party participating.

Illegitimate elections in 2010, contaminated by a corrupt electoral council, illegal exclusion of political parties, ballot-stuffing, and an arbitrary revision of the results set Haiti on its way to its current political crisis.  A month before the 2010 elections, 45 members of the U.S. Congress warned Secretary of State Hillary Clinton that supporting flawed elections “will come back to haunt the international community” by generating unrest and threatening the implementation of earthquake reconstruction projects.

The U.S. government ignored these warnings and provided the majority of the funding for those elections, directly contributing to the current crisis.

Ricardo Seitenfus, a respected Brazilian professor of international relations, had been working as a special representative of the OAS in Haiti since 2008.  After observing the 2010 electoral process, Seitenfus criticized international meddling in Haiti.  He was abruptly ousted on Christmas Day 2010.

Seitenfus takes a long view of the electoral crisis that he witnessed in 2010.  In his account, Haiti’s tragedy began over two centuries ago in 1804, when the country committed what Seitenfus terms its “original sin,” an unpardonable act of lèse-majesté: it became the first (and only) independent nation to emerge from a slave rebellion. “The Haitian revolutionary model scared the colonialists and racist Great Powers,” Seitenfus writes.  “France demanded heavy financial compensation from the new republic as a condition of its honoring Haiti’s nationhood. Haiti has been isolated and manipulated on the international scene ever since.”

The U.S. State Department affirmed its continued support for Martelly earlier this year.  A day before the Jan. 12, 2015 deadline to extend the terms of the legislators until new elections are held, the U.S. Embassy released a statement indicating the U.S. would work with Martelly, even if he ruled by decree.  Hours before the legislative branch shut down, White appeared in Parliament.  Many saw that as interference in favor of Martelly and encouraged opposition senators not to show up.

Progress in earthquake reconstruction, stabilizing Haiti’s democracy, and ending poverty will only be possible if the upcoming elections in Haiti are fair, inclusive, and conducted without U.S. and Western interference.

To overcome the mistakes of the past, the U.S. also must adopt a human rights-based response to the Haitian people and stop interfering in their struggling democracy.  It will also have to reckon with this question:  is the United States’ disregard for the human rights of the people of Haiti influenced by a lingering racist reaction to the first and only formation of a nation by former African slaves?

These guys went to Haiti – once – with a human rights delegation!
Wow!

Actually, the August 9 election had a turnout of something less than 5%.
2010 was manipulated by President Rene Preval to guarantee that Jean Henry Ceant or Charlito Baker did not with. They were knocked out in the first round.The Preval Plan was to see Jude Celestin – hi cousin – win the ballot against Mirlande Manigat, who actually saw polls showing her at 4.5% popularity.  Preval outwitted himself and Celestin was blocked for substantial reasons, leaving Manigat and Martelly.

Manigat was not, is not popular while Sweet Mickey is wildly popular with the young people and still is. Over 54% of Haiti’s votes are under the age of 24!
Martelly won, fair an square, in the run off, with probably 85% of the vote.
Like most people who parachute into Haiti for one visit, the authors have fallen victim of the Aristide myth.

The 2000 election saw the parliamentary vote so flawed that the CEP chief, Manus, refused to certify it. Aristide tried to kill him and he sought asylum in the States. The Presidential ballot, in the fall of 2000, was a fraud. Aristide may have received 95% of the 20,000 or fewe votes cast nationwide. So few voted that there was – effectively – no election.

But the International Community accepted this.

The authors are right. Outsiders, including ill-informed Human Rights specialists, like themselves, should stay home.

American ambassador, Pamela White, was an embarrassment.
Haitians are not really interested in Democracy because it has brought nothing to them. They want work, food, security and school for the kids. So far, Democracy has delivered none of these.

The people were better off under Duvalier. 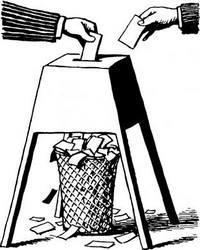