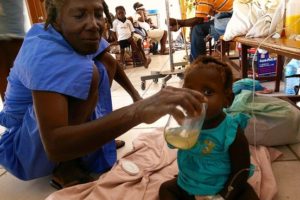 By INGRID ARNESEN And MIKE ESTERL

ST. MARC, Haiti—A deadly cholera epidemic in Haiti showed no signs of stabilizing Wednesday, even as the government and international aid groups scrambled to try and curb its spread.

The Pan American Health Organization said 4,147 people have been infected and 292 have died from the outbreak, which was first detected last week.

Those numbers are up from what the organization described as more than 3,100 infected and more than 250 dead on Monday, when health officials said an influx of aid was slowing the increase but warned that the numbers would continue to rise. “With a disease like this, you see a rapid upswing in the number of cases over a short period of time, and that’s what we’re seeing,” Jon Andrus, PAHO’s deputy director, said at a news conference Wednesday. The epidemic “doesn’t appear to be stabilizing,” he added.

Here in the town of St. Marc, about 60 miles north of Port-au-Prince, St. Nicolas Hospital continued to treat a steady stream of cholera patients Wednesday afternoon. Before entering the hospital, patients stepped on two large pieces of foam soaked in chlorine and washed their hands from a bucket of water. Medical staff rushed about to diagnose and treat more than 80 people with oral rehydration salts and intravenous fluids at two large triage tents in the hospital’s courtyard.

More than 20 patients with more serious cases of cholera lay on mats on the floor of the emergency room, including Dassode Rosalgo, an 11-year-old boy draped in a diaper and a T-shirt. His mother, Justicia, said he was rushed to the hospital from the town’s outskirts by ambulance on Tuesday. Ms. Rosalgo said she believed her son became sick after drinking from a plastic bag of water bought in a local store.

The aid group Doctors Without Borders was scrambling Wednesday to find an alternative site for a dedicated 400-bed cholera treatment center in St. Marc to reduce the strain on the hospital, where it said “patients are currently being treated in less than ideal conditions.”

Construction of such a facility was nearing completion Tuesday when a large group of locals demonstrated at the site, apparently fearing the facility would bring more cholera to the area. Several tents were burned during the demonstration, but there were no serious injuries, the aid group said in a statement Wednesday.

The epicenter of the outbreak is in the Artibonite region, north of Port-au-Prince. But PAHO said Wednesday that cases also have been identified in Haiti’s Central and West regions, and that possible instances are being investigated in the North, Northeast and Northwest regions. The regional arm of the World Health Organization said it expects cases to surface eventually in the neighboring Dominican Republic and that it has sent planning teams to that country. The Dominican government said earlier this week that it tightened restrictions on border traffic with Haiti.

Authorities and aid organizations in Haiti are ramping up the distribution of water purification tablets, oral rehydration kits and even soap to try and contain the acute diarrheal disease, which is transmitted through contaminated water and food. USAID, the U.S. humanitarian agency, said Wednesday it had distributed 25,000 sachets of oral rehydration solution, 5,000 bars of soap and 50,000 educational posters with aid partners. Authorities and aid groups also are trucking chlorine and clean water to affected areas.

Many Haitians don’t have ready access to potable water, heightening the risk that the epidemic will continue to spread. Aid workers also worry the disease could expand easily in the capital, where more than one million people were displaced by January’s massive earthquake.

Many people are in crowded refugee camps in Port-au-Prince and its outskirts. Some makeshift camps stretch for about 20 miles along the highway from the capital toward St. Marc, including thousands of displaced residents under blue plastic tarps.

Authorities said last weekend they had identified half a dozen cases of cholera in the capital.

PAHO said Wednesday it’s not recommending widespread vaccinations against cholera because multiple doses are required, meaning it would take too long to provide protection in the middle of an outbreak. But health authorities are evaluating preemptive vaccinations in areas that cholera hasn’t reached yet.