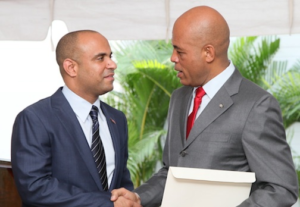 Watch the video here at the link below

With a surcharge on wire transfers and international phone calls into Haiti generating only between $40 million and $50 million for education, Prime Minister Laurent Lamothe said Monday the country is moving to increase taxes to raise $100 million to make “a big difference in the education system.”

Lamothe said the lower chamber of deputies has already approved the creation of the National Education Fund, and the government is awaiting a vote in the Senate.

In approving the fund’s creation, Haitian lawmakers would be agreeing to a government-imposed surcharge on the sales of alcohol, tobacco and a recently relaunched national lottery, as well as a 2 percent take on the profits at a state-owned bank, BNC. The money would go into the special education fund regulated by a board of directors and used to finance the construction of 200 schools, refurbishing of 2,000, and training and salary increases for thousands of teachers from primary school to state-owned universities, Lamothe said.

“In Haiti, 70 percent of the teachers have not completed sixth grade. We need to train the teachers, and that is a $23 million program,” Lamothe said Monday in a wide-ranging discussion with The Miami Herald’s editorial board. The conversation touched on a number of topics, including the ongoing political stalemate over an elections council, rising commodities’ prices that have triggered protests, and Haiti’s need to raise revenue and donors’ confidence.

The education fund is part of President Michel Martelly’s focus on sending more Haitian children to school tuition-free. Almost immediately after his May 2011 inauguration, Martelly announced that Haiti would be charging a $1.50 tax on wire transfers and 5 cents a minute on all incoming international phone calls into the country to fund free tuition.

But the tax initiative, shouldered mostly by the Haitian diaspora, has been controversial. Some lawmakers and Haitians have argued the regulatory charges are an illegal tax and require parliament approval.

Others say the transparency and accountability Martelly promised has been lacking. Martelly said when he announced the program that the funds would raise about $144 million over five years and have non-government oversight.

The president also has been criticized for focusing on quantity, rather than on the quality of education.

“Because of the surcharge, we were able to include 1.2 million children in the free school program,” Lamothe said, adding that 200,000 children were added this year alone. “We are very satisfied with what it has brought us so far.”

Still, he said, the funds “have not been sufficient” to address Haiti’s education woes. The newly launched National Education Fund would be in addition to the regulatory charges, and also help Haiti to improve the quality of education, he said.

While Lamothe remains optimistic that senators will approve the education fund, he could be in for a tough sell. Opposition senators have been at loggerheads with both he and Martelly in recent weeks, with some leading anti-government protests and others considering calling Lamothe for a confidence vote.

At issue are isolated protests in several cities since August, where angry demonstrators have complained about rising prices, government corruption and an ongoing political stalemate over the creation of a Permanent Electoral Council to oversee elections.

Lamothe downplayed the crises, saying that he’s focused on finding solutions in Haiti.

“That’s what I am focusing on.”