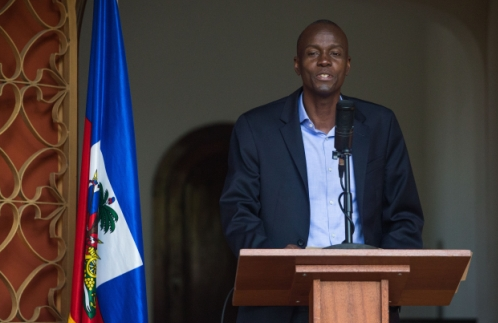 Haiti’s President-elect Jovenel Moise speaks to reporters in Petion-ville after his hearing at the public prosecutor’s office in Port-au-Prince on January 25, 2017. (Photo: AFP)

PORT-AU-PRINCE, Haiti (AFP) — Haiti needs nearly US$300 million to provide urgent assistance for its most vulnerable inhabitants, including those affected by Hurricane Matthew last October, the government and aid officials in Port-au-Prince said on Monday.

“In order to respond to the vital needs of some 2.4 million people, the humanitarian community that is working in Haiti aims to collect (US)$291.5 million,” said El-Mostafa Benlamlih, Representative of the United Nations Stabilization Mission in Haiti (MINUSTAH).

Four months after being battered by the massive hurricane, which caused US$2.8 billion in damage, more than 1.5 million people remain in dire need of humanitarian assistance, Benlamlih said.

Haiti is still struggling to recover from the world’s most significant cholera outbreak, with an estimated 30,000 cases expected this year, as well as the effects of the January 2010 earthquake, with tens of thousands of people still camping in tents without proper sanitation.