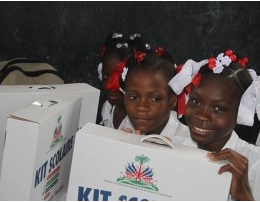 The Anti-Corruption Unit (ULCC) has asked the Public Prosecutor’s Office in Port-au-Prince to take public action against former Social Affairs Minister Roosevelt Bellevue (dismissed on August 29, 2017) https://www.haitilibre.com/en/news-21953-haiti-flash-revocation-of-the-minister-of-social-affairs.html), his Chief of Staff, the Ministry Administrator and 7 other persons in charge of 6 companies engaged in illegal public procurement and overcharging of school kits.

The ULCC recommends in its report to the Directorate General of Taxes (DGI) to make every effort to recover nearly 40 million gourdes representing the cost of the surcharge charged by three of the six suppliers of school kits on a total amount of contracts of nearly 120 million Gourdes (119,389,600)

On the other side, former Minister Bellevue has not ceased to claim his innocence and said he did not know or have been involved in this excessive billing case.

For several lawyers, Me Clamé Ocnam Daméus, the Government Commissioner at the Court of First Instance of Port-au-Prince must first refer the case to an investigating judge and obtain the order confirming or reversing the charges, to take legal action against the accused.