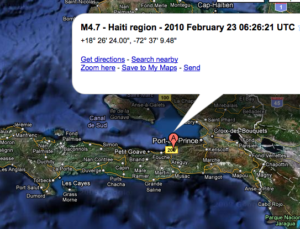 Port-au-Prince, Haiti (AHN) – A second aftershock in as many days struck Haiti on Tuesday. The early morning 4.7-magnitude jolt was centered 20 miles west-southwest of the capital of Port-au-Prince.

People awoke with a jolt at 1:26 a.m. on Tuesday. The latest in a series of mild tremors continues to frighten people and rearrange piles of debris.

This week’s aftershocks continue to dampen the spirits of people already experiencing setbacks and frustration following last month’s 7.0-magnitude quake. Over recent days survivors and aid workers have been forced to deal with rain, swelling latrines, seeping sewage, and bugs.

Prior to this latest quake, Haitian President Rene Preval said the death toll from last month’s 7.0-magnitude quake could rise to 300,000. Officials say current death tolls include the more than 200,000 bodies recovered from the streets, however many more may still lie trapped in the rubble.

If the death toll continues to climb, it would make the January quake one of the most lethal disasters in modern history.

Some 1.2 million people in Port-au-Prince alone remain homeless. Another 460,000 people are displaced, as many have left the country’s capital for the outer provinces.

Currently 1.1 million people are receiving aid through the World Food Program. Observers on the ravaged island say the mood at the food lines is growing increasingly somber and attitudes of despondency are the norm.

Let me tell you something.

When you are sleeping on the floor on a thin mattress, in a pitch black room, the minor shock felt like the end of the world.  I was in a deep sleep but – in a millisecond – was on my feet, poised for a dive through the door and onto our terrace.

It was as though the Quake had given another warning.

Sleep was a transitory element until dawn.

The destabilizing effect of these unexpected tremors is staggering.

Everyone lives in differing stages of anxiety.

It will take a generation to dilute the ever-present fear.