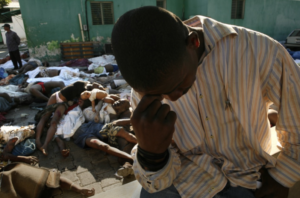 Haitian officials have confirmed that the death toll from the January 12 earthquake now stands at over 110,000, with 193,000 more people wounded and another 609,000 forced into temporary shelters.
Following the toll revision, the US Geographical Survey said on Saturday that the 7.0 magnitude quake that devastated the Caribbean nation was possibly the most destructive on record in the region.
“It’s probably accurate [to say] that this is the most deadly quake to occur in this part of the world,” Dale Grant, a geophysicist at the Geographic Survey told the AFP news agency.
“I don’t think we’ve seen anything like it in this area.”
Survivors found
Meanwhile, authorities in Haiti have ended search and resuce operations, a day after two survivors were pulled alive from the rubble of collapsed buildings in the capital, Port-au-Prince, 10 days after they were buried.
“The Government has declared the search and rescue phase over,” the UN’s Organisation for the Coordination of Humanitarian Affairs, said in its latest situation report on the relief effort on Saturday.
An Israeli rescue team on Friday freed a 22-year-old man from the rubble, who even managed to limp away despite suffering from dehydration. An 84-year old woman was the second survivor pulled alive.
“They pulled her out early this morning. She was barely responding, she had wounds all over her body, and maggots,” Vladimir Larouche, a Haitian-American doctor from New York who treated her, said.
“I treated her and made her stable. The [US] army evacuated her to a boat.”
But thousands of other survivors across Port-au-Prince were continuing to wait for food, water and medicines. Though international aid efforts have gathered momentum after the intial chaos and bottlenecks, many victims are yet to be reached.
Thousands of them are fleeing the capital, fearful of aftershocks and concerned at the bleak prospects for work and normal life.
Tony Birtley, Al Jazeera’s correspondent reporting from a port near the Haitian capital, said that the initial trickle of refugees has “become a flood”.
“The Haitian government is providing free buses for people to leave Port-au-Prince, others use any means of transportation they can”, Birtley said.
“And the harbour is operating at full capacity, up to seven thousand people a day are leaving by sea.”
‘Trying to survive’
Vinnie Filibert, a refugee, explained why so many are choosing to leave.
“Everyone is trying to survive but I know tomorrow there is going to be another stage it’s going to be the reality.
They are going to have to face the reality of no job, no house, no prospects and they are going to have to fight to stay honest.”
Haiti’s government is attempting to move 400,000 homeless people to new temporary villages being built outside Port-au-Prince.
Paul Antoine Bien-Aime, Haiti’s interior minister, said that in the first phase the government would move 100,000 refugees to tent villages of 10,000 each near the town of Croix Des Bouquets, north of Port-au-Prince.