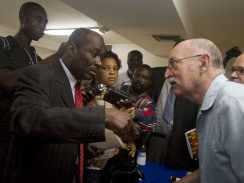 (AP)  PORT-AU-PRINCE, Haiti — Supporters of former dictator Jean-Claude Duvalier disrupted a news conference about abuses during his rule on Thursday, shouting down representatives of Amnesty International as they presented a report aimed at spurring his prosecution on charges of torture, murder and other crimes.

The 40-page report contains previously unpublished testimony by dozens of political prisoners who were jailed and tortured under “Baby Doc’s” 15-year rule before he was chased into exile in 1986.

The three-member Amnesty team plans to present the findings to Haitian officials and foreign diplomats in an effort to speed up the stalled investigation and prosecution that began in January just days after Duvalier suddenly returned to Haiti.

But before the advocates were able to speak Thursday, two dozen Duvalier supporters stormed into a conference room at Le Plaza Hotel, denouncing the visitors as “imperialists” who were fomenting division in the country.

“Please get out!” said Osner Fevry, an attorney long hired by political figures with ties to the Duvalier regime. “We don’t need people to come to divide us.”

More than a dozen victims and family members showed up to describe oppression under the Duvalier, but they left because of the intimidation, Burke said.

Outside the hotel in downtown Port-au-Prince, some of the demonstrators paraded skulls and femurs that they said belonged to members of Duvalier’s private militia who were persecuted after he fled. The bones, they said, were evidence of crimes committed after Duvalier’s ouster.

“Duvalier is being persecuted in his own country,” Reynold Georges said. “I have a client to defend, in the tribunal or wherever.”

The Amnesty report urges Haitian authorities to acknowledge responsibility for past grave human rights violations and calls on President Michel Martelly as the head of state to issue a public apology to the victims. It also calls for a thorough investigation into the case and for plaintiffs to receive legal assistance.

Duvalier, the son of Francois “Papa Doc” Duvalier, was tapped in 1971 to serve as president when he 19. Duvalier was ousted from Haiti 15 years later, marking an end to a brutal period during which political opponents were jailed and tortured and his private militia, the Tonton Macoutes, terrorized the population.

Yet again we ask the biased Amnesty people what they are doing about the hundreds of people murdered during the Aristide and Preval presidencies. Their bias is so obvious as to negate any of their opinions on Duvalier who is still a respected figure among Haiti’s 9,000,000 people. Preval is despised and Aristide is a forgotten figure, in spite some media people’s effort to create images out of step with the truth.