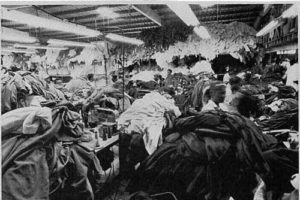 The Montreal-based apparel firm Gildan Activewear Inc. has asked its Haitian subcontractor, Genesis S.A., to reinstate four unionized workers that the plant’s managers fired in the last week of September, Gildan senior vice president Peter Iliopoulos told the Montreal Gazette on Nov. 29. The company has “requested the reinstatement of the employees with full back pay dating back to the date of dismissal and also recognition of full seniority for these individuals as though they had never left the company or factory,” Iliopoulos said. Another major North American apparel firm, North Carolina-based Hanesbrands Inc., has taken similar action with its subcontractor in Haiti, Multiwear SA, which fired Hilaire Jean-Jacques, a member of the same union, on Sept. 30.

The five unionists were all officers of the newly formed Textile and Garment Workers Union (SOTA). A sixth SOTA officer was fired in the same week at One World Apparel, which produces for Superior Uniform Group Inc., a manufacturer based in Seminole, Florida.

Gildan and Hanesbrands’ call for the workers to be reinstated came in response to a Nov. 24 report (PDF) by Better Work Haiti, a partnership of the International Labor Organization (ILO) and the World Bank’s International Finance Corporation (IFC) that was set up to monitor labor conditions in Haiti. “There is strong circumstantial evidence to demonstrate that the officers of the SOTA trade union were terminated based on their trade union affiliation,” the group concluded, saying the timing of the firings “strongly suggests an effort by employers to undermine the new union, and to curtail its growth before it had the opportunity to expand its membership.” The report recommended reinstating the workers with back pay.

SOTA was formally launched on Sept. 15 with the goal of organizing workers in Port-au-Prince’s garment assembly sector, which currently has no unions; only one of Haiti’s 23 assembly plants is unionized. Unionists and supporters, including the leftist workers’ organization Batay Ouvriye (“Workers’ Struggle”), responded to the firings with an international campaign to pressure the plants for reinstatement. (Montreal Gazette, Nov. 30, Dec. 1; Center for Economic and Policy Research (CEPR), Haiti: Relief and Reconstruction Watch, Nov. 30)

The ceremony was followed by the second Invest in Haiti Forum, which the Haitian government, the Inter-American Development Bank (IDB) and the Clinton Foundation hosted in Port-au-Prince on Nov. 29 and 30. Some 1,000 investors, business people and government officials attended the event, which highlighted plans for additional export-oriented projects. One was a partnership of the Inter-American Development Bank (BID), the Swiss-based multinational Nestlé S.A. and the National Federation of Coffee Producers of Colombia for developing coffee exports. Another was an agreement by the multinational cell phone company Digicel Group and the Marriott International hotel company to build and manage a $45 million, 168-room hotel in Port-au-Prince–where hundreds of thousands of people continue to live in tents or other temporary shelters nearly two years after a devastating earthquake. (AlterPresse, Haiti, Dec. 2)

On Nov. 29 Haiti Grassroots Watch (HGW, Ayiti Kale Je, “Haiti Keep Your Eyes Open” in Creole), a project sponsored by several Haitian media organizations, released a seven-part assessment of these types of export-oriented development strategies. The series, “Haiti—Open for Business,” detailed low wages and anti-labor practices in the assembly plant sector and described the likely environment damage from the Caracol industrial park in the north. “Basing the country’s development on assembly industries is a big error; it will lead us into a hole, into dependency,” Haitian economist Camille Chalmers of the Haitian Platform Advocating an Alternative Development (PAPDA), told the investigators. “People need to know what FTZs [free trade zones] are, what has happened in Mexico, or Honduras, so they don’t think these things will ‘save’ us,” Chalmers said.

“Manufacturers do not offshore their jobs in order to ‘jumpstart’ industry or ‘improve the standard of living,'” the HGW reporters concluded. “They do it to make a profit. As Canadian company Gildan Activewear said in a recent newspaper article, the savings offered is ‘too good to pass up.'” (HGW Nov. 29/11)

Correction: Following our sources, we reported previously that Hanesbrands’ Haitian supplier was One World Apparel, which actually produces for Superior Uniform Group Inc., according to the Montreal Gazette; also, the name of the unionist fired from Multiwear was given incorrectly as “Hilaire Jean-François.”

From Weekly News Update on the Americas, Dec. 4.