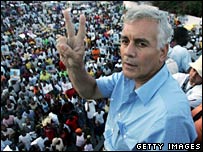 WEST PALM BEACH, Fla. — Charles Baker stood in front of a small group of Haitian-Americans in the mostly empty Palm Beach County commission chambers Friday to announce that he is running to become Haiti’s next president.

“The international community calls it one of the most corrupt governments in the world, and I tend to agree with them,” Baker told WPBF 25 News.Baker was born in Haiti and runs farming and clothing businesses there. Baker said he was urged to run for president after helping overthrow former President Bertrand Aristide in 2004.

“I don’t like standing up even in front of even five people, let alone a whole country,” Baker said.Baker said he’s in Florida announcing his campaign because 2 million Haitians are in the U.S.”We’re going to need them for the elections,” Baker said. “We’re going to need them to call their families and tell them, ‘Look, go out and vote. Don’t stay home. You stay home, they are going to vote for you, and you might not like what you get.'”Baker held up his Haitian election card with his signature and thumbprint on it.

He said the system should be foolproof to prevent election fraud, but admitted that it isn’t.”If you put a good president that sets up a good government and reestablishes the authority of the state, you will have a safe country and a stable country to go to,” Baker said.Baker is running against current President René Préval and a crowded field of others.