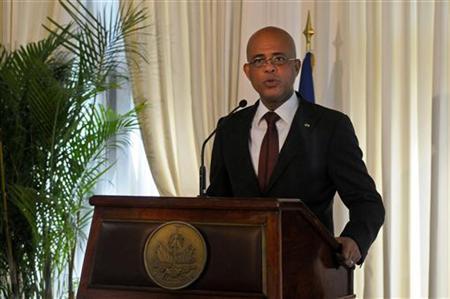 (Reuters) – Haitian President Michel Martelly held a hastily arranged news conference on Thursday to prove he is not a U.S. citizen in response to a mounting public campaign questioning his eligibility to hold office.

In front of religious leaders and members of the diplomatic community, the president showed his Haitian passport to reporters, highlighting U.S. entry stamps in it, to prove he does not hold dual nationality.

The Haitian constitution does not recognize dual nationality for senior government officials, and a parliamentary commission has been looking into allegations that some politicians hold foreign citizenship.

The dual nationality issue has hung over the Martelly government since his inauguration last May. It was partly responsible for the resignation last month of Prime Minister Garry Conille, who had pushed for full disclosure by all government ministers.

Martelly, a popular folk singer known by his stage name Sweet Micky, called the news conference to put the matter to rest after mounting political tension as rumors swirled Thursday about the commission’s results.

Martelly then invited U.S. Ambassador Kenneth Merten to weigh in. Merten said it was highly unusual for a U.S. official to comment publicly about personal issues, due to privacy laws in the United States.

“The laws in the U.S. are very strict on this matter,” he said, speaking in Haitian Creole. “I am not supposed to discuss the dossier of anyone. But with the permission the president has given me, I can inform you that President Martelly is not American. He is Haitian.”

Merten said he was present when Martelly turned in the U.S. permanent residency card he had once held, and said Martelly was issued a non-immigrant visa to travel to the United States.

Journalists were later invited to take a close look at the passport’s pages, including entry stamps to the United States. Among them was a stamp dated November 21, 2007, a date on which opposition senators had accused him of entering the United States using a U.S. passport.

“Now my colleagues in the Senate have to forget about this and move on,” said pro-Martelly Senator Edwin Zenny.