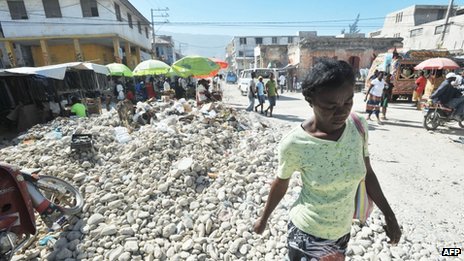 Reconstruction has been slow in Haiti, where more than 2 million people lost their homes

Haiti’s President Michel Martelly has said international aid to help Haiti recover from a devastating earthquake three years ago is not working.

In a speech to mark the anniversary, Mr Martelly said the government had directly received only one third of the aid pledged.

Aid donors needed to co-operate more closely with the Haitian government, he added.

Some 200,000 people died in the earthquake, the authorities said.

More than 300,000 Haitians remain in temporary shelter with poor sanitation.

“Where has the money given to Haiti after the earthquake gone?” asked the president.

“Most of the aid was used by non-governmental agencies for emergency operations, not for the reconstruction of Haiti.” 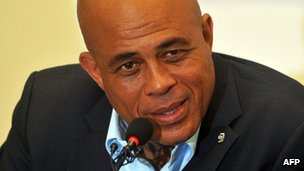 Michel Martelly came into office after the earthquake

He said he was not asking for absolute control of all aid funding, but rather trying to achieve a better balance between official and NGO programmes.

“Something is not working,” Mr Martelly said, calling for everyone involved to reassess the recovery initiative.

Much of the Caribbean nation’s capital, Port-au-Prince, was devastated by the powerful earthquake that struck in the afternoon of 12 January 2010.

The presidential palace was one of thousands of buildings destroyed in one of the poorest countries in the Western Hemisphere.

“We have recorded damages of nearly $13bn (£8bn),” Mr Martelly told journalists who had gathered at the palace for a short ceremony marking the anniversary of the disaster.

Haiti has since been affected by landslides and hurricanes, as well as an epidemic of cholera and rampant crime.