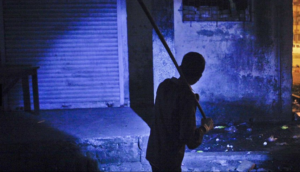 PORT-AU-PRINCE, Haiti — Haiti’s president on Friday put off a controversial plan to restore the country’s disbanded military until a commission can be formed to study how best a new army can replace the U.N. peacekeeping force.

President Michel Martelly said he was appointing a civilian commission that over the course of 40 days will identify the goals of a new military force.

The restoration of the military was one of Martelly’s campaign promises but drew immediate opposition from foreign diplomats and other critics, who said the country would be better off beefing up its underfunded and undermanned national police force.

“This decision does not question our first and constant determination to strengthen the National Police,” Martelly said during a speech in the capital’s central plaza to mark a battle that led to independence from France in 1804. But, he also said, “I’m telling you today that the dignity of the Haitian people is coming with the creation of the armed forces.”

Martelly told his audience of diplomats, government officials and supporters that the new military force would combat smuggling and patrol parts of Haiti where he said terrorists are a constant threat. He did not elaborate on what he meant by terrorists, who have not been known to pose a threat in Haiti.

A government official had said earlier that Martelly would use the national speech to issue a decree creating the new military. Besides the issue of cost, some critics have expressed alarm at restoring a military that had been notorious for abuses before it was disbanded in 1995 under former President Jean-Bertrand Aristide.

Martelly also urged former soldiers who were dismissed in “humiliating conditions” to “bury grudges” and he apologized to Haitians who suffered at the hands of the army.

Some critics have also questioned whether Haiti needs a new army as it still struggles to recover from the January 2010 earthquake and a cholera epidemic that’s given the country the highest infection rate in the world.

But many in Haiti welcome the military’s restoration as a source of potential jobs amid deep poverty — and as a point of national pride. The idea resonates in a country where Martelly and other politicians have denounced the U.N. peacekeeping force that has helped keep order since Aristide’s ouster in 2004.

“You can’t talk about the withdrawal (of the U.N. force) if you don’t have a plan for your own army,” Martelly told a crowd of about 100 supporters who interrupted his speech at times to chant, “Long live the army.”

Martelly said a decree will be announced on Monday that will name members of the commission. During its 40-day mandate, the panel will define the mission of the army in meetings with business and religious leaders, lawmakers, attorneys, political parties and grassroots groups.

The commission will be required to present its findings on Jan. 1, Haiti’s independence day.

Georges Michel, a defense adviser in the Interior Ministry, said the commission was a necessary step to ensure the army becomes a reality.

“The reinstatement of the army will be done but it will be done properly and according to rules and procedures,” Michel said after the ceremony. “The president will not tolerate or condone anything anarchic.”

There seemed to have been high hopes among the men who showed up in downtown Port-au-Prince to learn more about Martelly’s effort to restore the army. But they were dashed as the president announced that he would form a commission.

“It’s a speech to put people to sleep,” Jonel Jean-Juste, 38, a sometime student who said he had viewed the army as a job opportunity. “Putting together a commission is not going to bring the army back.”

“It’s a very good idea to consider the commission and see what the country really wants,” Hernandez said.

For months, former soldiers from the disbanded army have led training exercises for hundreds of men and a few women who are eager to serve their country or secure a full-time job. The presence of the hopeful soldiers, dressed in camouflage and heavy boots, has raised concerns among some international officials that they could be used as private militias.

Samson Chery, a former sergeant who runs a group in the Port-au-Prince metropolitan area, withheld judgment on the new commission.

“We won’t criticize the president,” Chery said by telephone. “We are waiting for Jan. 1 for the report of commission.”