New findings indicate that at current deforestation rates, all of Haiti’s primary forest will be gone within the next two decades, leading to the loss of most of the country’s endemic species.

The study was authored by researchers at Temple University, Oregon State University, the U.S. Forest Service and Société Audubon Haiti, a non-profit conservation organization based in Haiti. Its results were published recently in Proceedings of the National Academy of Sciences.

By analyzing aerial photography and satellite images, researchers discovered that primary forest cover in Haiti shrank from 4.4 percent in 1988 to just 0.32 percent in 2016. They report that 42 of Haiti’s 50 largest mountains have lost all of their primary forests and the country is already undergoing a mass extinction of its wildlife due to habitat loss.

“Haiti’s recognized as having the highest proportion of threatened amphibians in the world,” said S. Blair Hedges, director of Temple University’s Center for Biodiversity and lead author of the study, in an interview with Mongabay. “And that’s largely from the deforestation.” 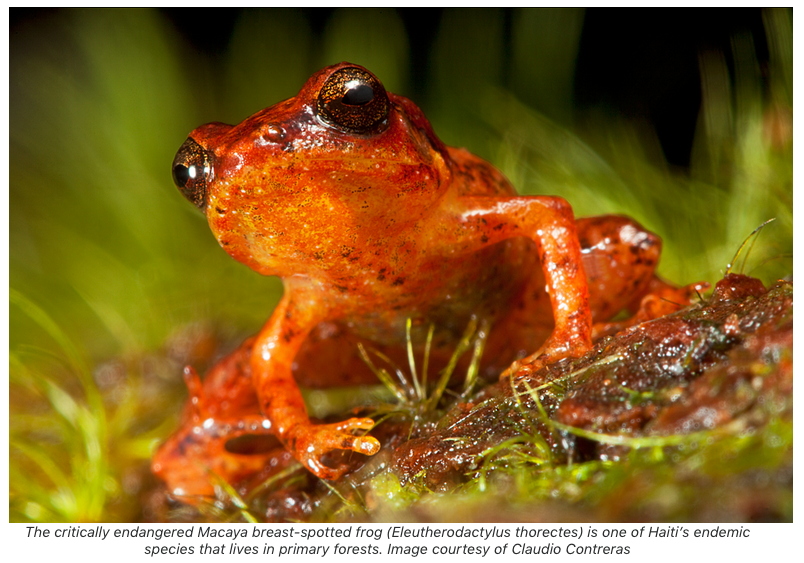 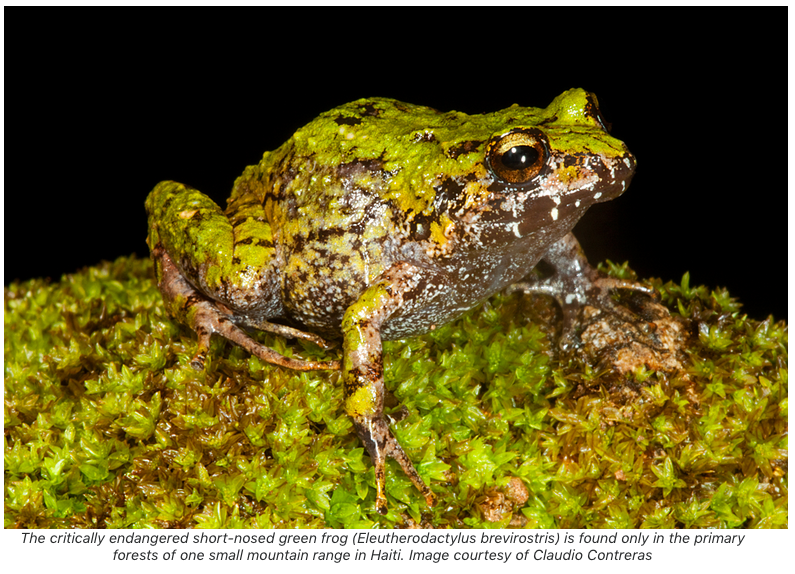 Other species at risk include the Hispaniolan solenodon(Solenodon paradoxus), a large shrew-like animal native to Haiti and neighboring Dominican Republic. One of the oldest mammals on the planet, the solenodon survived the mass extinction event that wiped out the dinosaurs.

But it’s not faring well in today’s world.

“It’s almost extinct,” Hedges said. “It’s very, very hard to find.” However, the team did see recent evidence of one in mountainous primary forest during a biodiversity survey that took place between 2009 and 2015.

In all, the survey turned up 28 species that are endemic to specific mountaintops – including several new frog species. Hedges says there were likely many more, but as their habitat disappeared, so did they.

“Unfortunately entire mountains have been deforested before biologists have surveyed them, so there were almost certainly many more species that we will never know about,” Hedges said.

Along with the extinctions of unique animals found nowhere else, Haiti’s deforestation has another consequence: landslides and flooding. The researchers found that without tree roots to hold soil, mountains tended to lose their topsoil to erosion soon after deforestation. And without trees to sop up rainwater, lowland areas are much more prone to catastrophic floods.

“Hundreds to thousands of Haitians die each year from flooding that is largely deforestation-related,” Hedges said. He pointed to a flooding event in 2004that killed more than 1,200 people in a single town.

Hedges says that Haiti’s deforestation is largely driven by small-scale farming and charcoal production, which involves harvesting wood and heating it to remove water and volatile compounds. Doing this turns wood into a source of fuel that can be burned without producing as much smoke.

Around 11 million people live in Haiti, and many of them depend on wood charcoal for fuel and subsistence farming for food. As the lowlands lost their trees, people began deforesting higher and higher into the mountains. 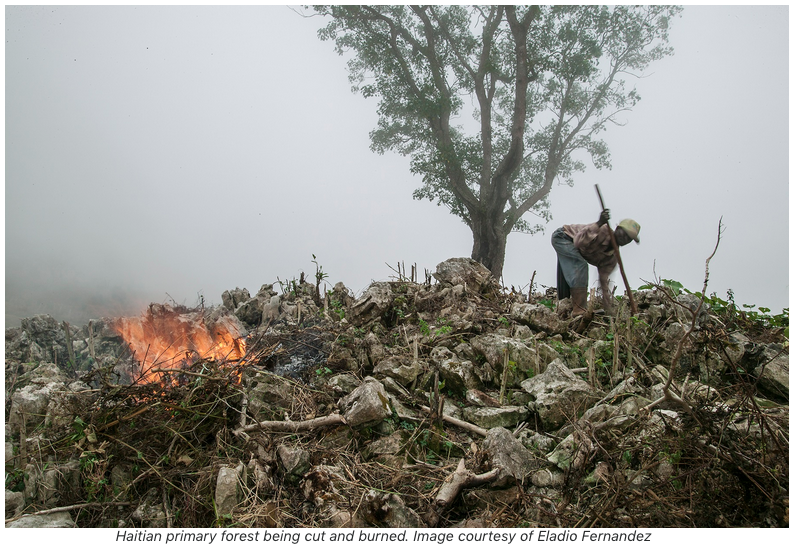 The researchers witnessed this first-hand while conducting their biodiversity surveys, even encountering locals at study sites they had to use a helicopter to reach.

“I did a lot of hiking and we would run into Haitians at the most remote places in the country,” Hedges said.

Even protected areas aren’t immune from deforestation. Hedges recalled meeting a ranger a few years ago in Pic Macaya National Park – one of the last remaining sites of primary forest in Haiti.

“He told us that there were only 20 of them [rangers] but at any given time there are at least 200 teams of tree cutters all throughout the park – it’s a really big area – and they all have weapons, yet the rangers don’t have any weapons.”

In their study, Hedges and his colleagues write that Haiti’s two original national parks, Pic Macaya and La Visite, lost between 60 and 75 percent of their primary forest cover since they were declared protected areas 35 years ago. The researchers say improved monitoring is needed if forests – particularly primary forests – can be saved.

“Expanded detection and monitoring of primary forest globally will improve the efficiency of conservation measures, inside and outside of protected areas,” the authors write. 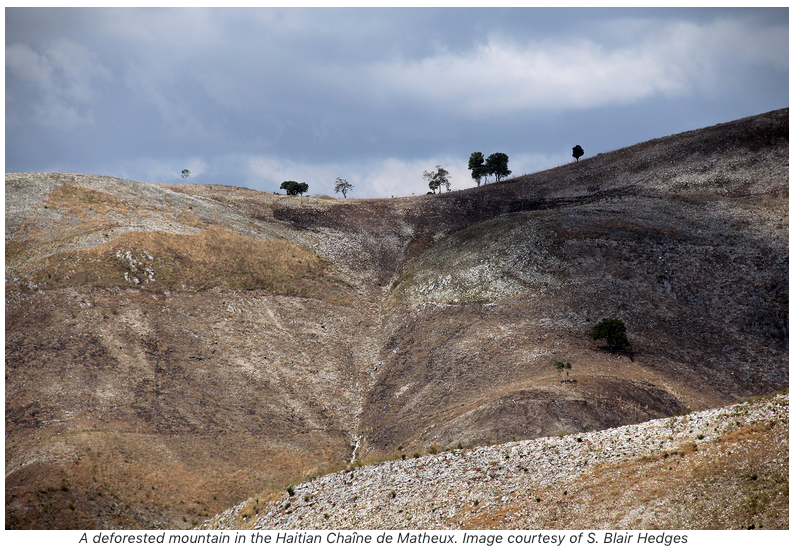 Monitoring forests starts with figuring out what really counts as forest, which can be surprisingly contentious. The Food and Agriculture Organization of the United Nations (FAO), for instance, defines forestas “Land spanning more than 0.5 hectares with trees higher than 5 meters and a canopy cover of more than 10 percent.”

However, according to Hedges, such a generous definition can distort the reality of a country’s forest cover and overlook primary forests, which are vital for biodiversity.

“When [the FAO defines] forests as having up to 90 percent of the trees missing, many of us would not call that forest, “ Hedges said, adding, “for a biologist like myself it’s almost absurd really.”

The FAO doesn’t plan on changing its approach to forest definition, according to Anssi Pekkarinen, team leader of the FAO’s Global Forest Resources Assessment. However, he says they are allowing “more detailed reporting at the sub-category level,” which includes differentiation of “planted forest” and “naturally regenerating“ forest.

“FAO is also working together with its partners to further improve the consistency of the reporting on primary forest,” Pekkarinen told Mongabay. “This work was initiated in 2017 and is expected to be completed within the coming years.” 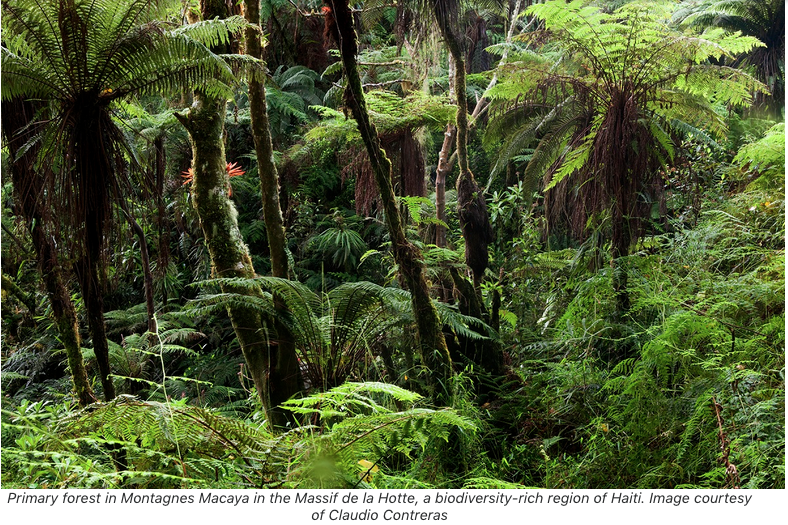 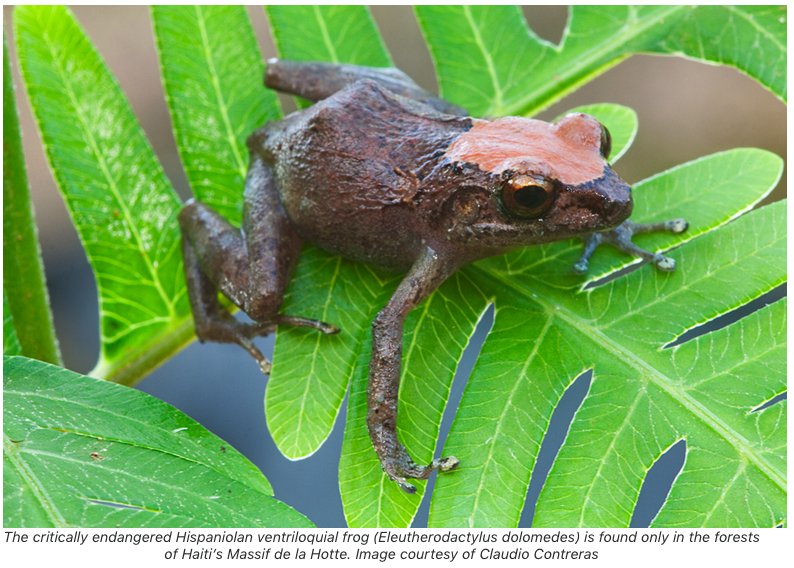 In response to the country’s deforestation crisis, reforestation projects have popped up, including Haiti Takes Rootand the USAID Reforestation Projectlaunched in January 2018, which aims to plant more than five million trees.

While reforestation can have positive outcomes, Hedges and his colleagues say that preservation of primary forest is the best way to stymie extinction.

“Primary forest is critical for maintaining much of the world’s biodiversity, and its loss is the greatest threat to species survival, even if primary forest is later replaced by secondary growth,” they write.

The researchers note that even places where some primary forest is left standing quickly become un-forested due to degradation. “However, lightly disturbed habitats could provide lifelines for some species if protected and allowed to recover.”

To help Haiti hold on to its forests and biodiversity, Hedges started an NGO called the Haiti National Trustthat is set to purchase a mountain in Haiti in a bid to preserve its remaining primary forest.

“Our mission is to protect the last primary forests and biodiversity hot spots,” Hedges said. “It is a big task and will require a large inflow of resources, but I remain optimistic.”