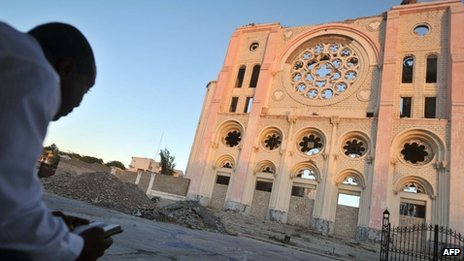 The cathedral in Port-au-Prince was destroyed by the quake

The people of Haiti have been remembering the victims of a devastating earthquake that struck the country four years ago, killing more than 250,000 people.

Across the country people have attended special religious ceremonies.

President Michel Martelly laid a wreath at a mass grave in Saint Christophe, where many victims were buried.

Some 150,000 people are still living in temporary accommodation.

The government issued a decree declaring 12 January a day of remembrance and reflection.

The shallow seven-magnitude earthquake struck on a Tuesday afternoon. The epicentre was just outside the capital, Port-au-Prince. 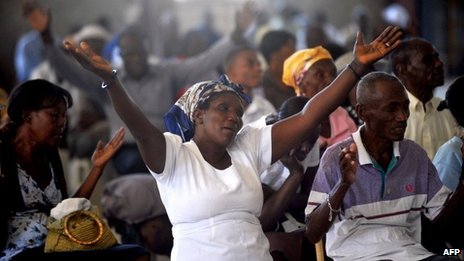 At least 1.5 million people were left homeless, in a country with a population of about 10 million.

Four years after the quake, signs of destruction are still everywhere.

Haiti, the poorest country in the Americas, has struggled to rebuild its infrastructure, despite millions of dollars in aid pouring into the country.

President Martelly said a year ago that only a third of the money pledged after the 2010 earthquake had actually been delivered.

“Where has the money given to Haiti after the earthquake gone?” asked Mr Martelly.

“Most of the aid was used by non-governmental agencies for emergency operations, not for the reconstruction of Haiti.” 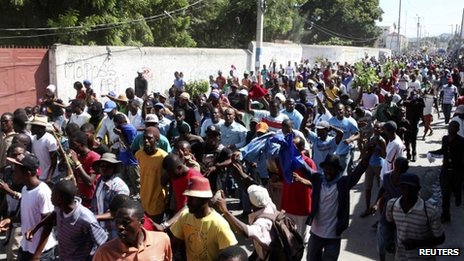 Mr Martelly, who came to power after the quake, estimated the material cost of the disaster at £13bn (£8bn).

But demonstrators have gone to the streets in recent months to demand the president’s resignation, denouncing the high cost of living and accusing the government of corruption.

Since the earthquake, the Caribbean nation has been affected by landslides and hurricanes, as well as an epidemic of cholera and rampant crime.