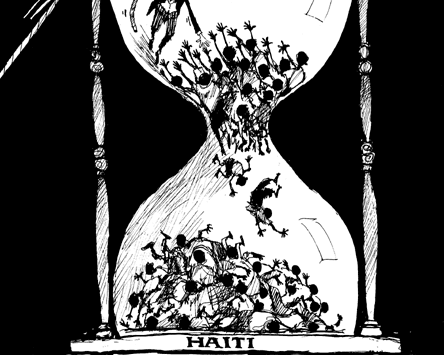 Haiti’s provisional president said Friday he’s committed to meeting deadlines that will ensure his caretaker government lasts for no more than 120 days to comply with a recently negotiated accord.

The comments by President Jocelerme Privert came at his first press conference as Haiti’s interim leader. A majority of lawmakers chose the former Senate chief last weekend to lead a short-term caretaker government, filling a void left by the end of ex-President Michel Martelly’s tenure.

Martelly departed office on schedule Feb. 7 with no elected leader to take his place. Violent opposition protests and deep suspicions of electoral fraud favoring his chosen successor, Jovenel Moise, derailed a scheduled runoff vote last month. It was postponed for the first time in December.

A last-minute accord reached early this month by lawmakers and Martelly called for a postponed runoff to be held April 24, with a newly elected president installed on May 14. It said the provisional president would be elected for a term of no more than 120 days.

While various political figures have asserted that the transitional government should last for a longer period of time, Privert told reporters Friday that he was “going to do whatever it takes for the calendar of 120 days to be respected.”

Kenneth Merten, the U.S. State Department’s special coordinator for Haiti, said in a press briefing this week that the success of the accord hammered out by the country’s political leaders depended on the interim government’s commitment to fulfilling terms of the deal on the timeline they established.

Merten said previous interim administrations in Haiti did not have good track records when it came to moving the country forward.

“If you look back at transitional governments in Haiti in the past, I think we have seen these periods as times when work at addressing the chronic challenges that Haiti faces doesn’t really progress very well,” Merten said.

Privert, in fact, was jailed for two years on charges that were eventually dropped under Haiti’s last interim government, which lasted for two years following a violent 2004 rebellion that ousted ex-President Jean-Bertrand Aristide from power for a second time.

On Friday, Privert also named six candidates vying to be the next prime minister. They have been proposed by political factions and civil society. He says he is trying to smooth deep divisions to ensure a prime minister is chosen with as much consensus as possible.

The proposed candidates include Mirlande Manigat, a former first lady and presidential hopeful in 2010, Edgard Leblanc Fils, a former Senate president who was beaten by Privert in the parliamentary vote to be provisional leader, and Fritz Jean, an economist who once was governor of Haiti’s central bank.