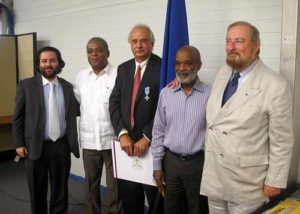 By THE ASSOCIATED PRESS:

International observers began examining contested results from 19 legislative races on Monday, shortly after Haitian officials announced they would delay certification of the results of last month’s runoff election. Colin Granderson, head of the election observer mission for the Organization of American States and the Caribbean Community bloc, said a team of monitors was sifting through the results. The United States asked last week for an explanation of how Haiti’s election commission declared victories for 18 candidates who ended up with far more votes than they had in the preliminary returns. On Monday, the commission said it would delay publishing the results for 19 legislative races “for the sake of transparency and in the best interests of the nation.”