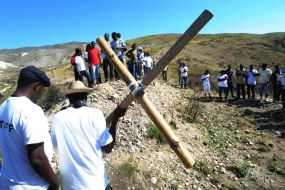 Haitians have flocked to churches to mark the second anniversary of the catastrophic 2010 earthquake that killed a quarter-of-a-million people in the poorest country in the Americas.

The flattened presidential palace and Port-au-Prince’s hollowed-out cathedral offered striking symbols of the failure of an international aid effort that never lived up to its promise, despite billions of pledged dollars.

Beside the ruins of the Cathedral of Our Lady of the Assumption, whose roof and towers collapsed after the 7.0-magnitude quake, 40-year-old man Jean Wilbert, who lost his legs in the disaster, ekes out an existence in a makeshift camp with his mother.

“I’ve been here for the past two years,” Mr Wilbert said, admitting he found it hard emotionally to move on from the disaster.

“I cannot detach myself from this place where I lost my two legs.”

UN fact sheets highlighted the hundreds of thousands of people relocated from tent cities in 2011 and the 1.1 million children now receiving daily food aid, but the pace of reconstruction has been painfully slow.

That is partly explained by the cataclysmic scale of the January 12, 2010 disaster, which killed, injured or displaced one in six of the Caribbean nation’s entire population, razing some 250,000 homes in the capital alone.

But Haiti was already the economic basket case of the Western Hemisphere, a dysfunctional country often ruled by a corrupt elite while 80 per cent of the population lived below the poverty line, most in stinking slums.

More than half-a-million people displaced by the 2010 quake subsist in 800 squalid tent camps around the capital, and health authorities, propped up by an army of NGOs, are still battling a cholera epidemic that has killed nearly 7,000 people since November 2010.

In the largely Roman Catholic country, places of worship were holding services throughout the day to remember the disaster, throwing open their doors to quake survivors, many still traumatised by the events of that day.

Government officers were shuttered along with schools and businesses.

At 4:53pm local time, the moment the earthquake struck, president Michel Martelly was to lay a wreath at the mass grave north of the capital where most of the dead lie entombed, dumped there in lorry-load after lorry-load in the days after the disaster.

UN chief Ban Ki-moon paid tribute to those who died, including more than 100 UN personnel, and called on international donors to keep up their “vital support” for the rebuilding two years after the disaster.

“Despite considerable achievements, including in the areas of rubble removal and the resettlement of displaced persons, many Haitians remain in need of international assistance,” he said.

More than 50 per cent of the quake rubble has now been cleared, but little has been erected in its place.

Most of the hundreds of thousands of people who fled Port-au-Prince after the quake have since returned to the overcrowded capital, desperate for work and food.