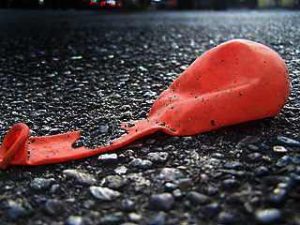 Portraits of candidates and posters in their party colors have finally invaded the public space. But, in front of an electrical pole plastered with photos of various candidates for Haiti’s Senate and Chamber of Deputies, Haitians like Luckson, a shoe-shiner, are completely indifferent.

“Him I know, but he won’t do anything for me. Her — I’ve never seen her face before,” he says, surveying the posters that now adorn his corner.

For a brief moment, the nearby vendors and their clients discuss the candidates and argue about the backgrounds of these would-be parliamentarians. They all agree on one point: they will not vote Sunday “because there’s no point.”

In a country where politics is seen as rotten with cronyism and corruption, the great majority of these impoverished citizens do not believe their vote has any power.

In the last vote, the second round of the 2011 presidential elections, less than a quarter of Haitians voted.

This time, when every seat in the legislature will be voted on, participation is forecast to be around only 15 percent of the public.

The international community, which has offered financial and logistical support for the elections, is worried that indifference could threaten the success of the process.

On Tuesday, Sandra Honore, head of the UN mission to Haiti, urged Haitians to get themselves to the polls.

“Your participation in large numbers and your decision to say good-bye to violence in any form — this is the chance for you to show once and for all that you choose peace and democracy,” she said in Creole in an online video message.

When it kicked off in March, the election process was met by an avalanche of candidates: more than 1,800 competing for 129 vacant parliamentary posts.

Several days away from voting, that enthusiasm is now absent.

“The intensity of the campaign is rather weak,” said José Antonio de Gabriel, deputy director of the European Union’s election observation mission.

“We don’t see a strong mobilization effort by the candidates or parties.”

The length of the electoral process could help explain this. Sunday is only the first of three polling days before the end of the year.

Between now and then, Haiti will elect nearly all of its political personnel: deputies, senators, mayors, local officials and even the president.

“Haitians have a long electoral process ahead, with three polls, which isn’t always easy on the finances of the parties,” de Gabriel said.

But beyond the posters on the walls, many parties have little else to offer voters.

“In Haiti, legislative elections have a strong local component. It would be good for the candidates to propose platforms and to support a debate of ideas. For now, we see little of that,” de Gabriel said.

Luckson, who works six days a week to earn just enough to feed his family, laughs at the idea of voting based on candidates’ policies.

“That’s something for foreigners! Candidates always promise so much, but in the end, we’re poor, we have nothing. Only their families and their friends benefit.