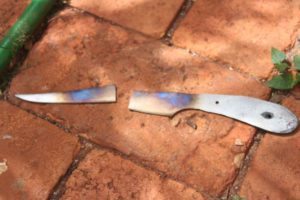 PORT-AU-PRINCE, Haiti — Haitian authorities are ordering some army veterans and would-be soldiers to clear out of several old barracks they have taken over in recent weeks in hopes the disbanded army will be revived, the Interior Ministry said Tuesday.

The government office ordered individuals carrying illegal weapons and wearing military fatigues to leave the barracks of the Armed Forces of Haiti and other sites owned by the Haitian government. The Interior Ministry said it wouldn’t tolerate gunmen disturbing the peace.

It was the strongest statement yet by the Haitian government about the former soldiers who are pressuring Haiti’s President Michel Martelly to honor his campaign pledge to restore the army that was disbanded in 1995 because of its abusive past.

The campaign promise has proved controversial. Some Western governments have said money would be better spent on developing the understaffed national police department and rebuilding the country following the 2010 earthquake. Martelly has countered that the force would be a modern one that would respond to natural disasters and protect the environment.

In recent weeks, hundreds of men have ventured out in public wearing fatigues and marching to step up pressure for the army’s return and for $15 million in lost wages and pensions. Their newly visible presence, confined to small training camps, has led international diplomats to suggest that they bear an uneasy resemblance to a private militia. Some have been spotted carrying handguns.

Against a backdrop of heightening political tension in Haiti, the U.N.’s top envoy, Mariano Fernandez, has called the bands of men an “unnecessary provocation.”

The Interior Ministry said in its statement that the men wouldn’t receive compensation unless they leave the bases.

Samson Chery, a former sergeant, declined to say by telephone Tuesday night if the troops would heed the government’s orders.

“We are going to continue to fight for our rights to be respected,” he said.

His colleague Aubin Larose, also a former sergeant, said he was confident Martelly would bring back the army.

“He’s going to do it because he’s a good Haitian,” Larose said.