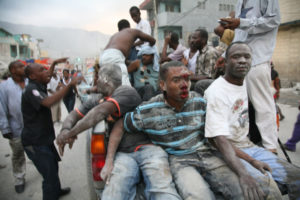 Confusion reigns in the impoverished Carribean island state of Haiti as the true scale of the earthquake remains unknown but appears to be of epic proportion.

It is the most powerful quake to hit the region in 200 years and scythed through the Haitian capital Port-au-Prince.

Its epicentre was just ten miles away.

President Obama has mobilised an aircraft carrier three surface ships and 2,000 marines. Rescue teams are flying out from Britain and elsewhere in Europe tonight.

Channel Four News understands the United Nations Secreatry-General’s special repreantative Hedi Annabi and his deputy and many other senior UN peacekeepers have been killed.

Rescuers at the UN compound are struggling to reach others who were trappend in a high level meeting.

Mr Annabi was visiting a Chinese police delegation when the earthquake struck.

UN peacekeeping chief Alain Le Roy, said fewer than ten people “some dead, some alive” have been pulled from the rubble of the five-story building.