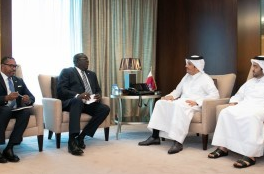 Chancellor Bocchit Edmond at the head of a Haitian delegation composed among others of Jean Baden Dubois, the Governor of the Bank of the Republic of Haiti (BRH); of Cliffort Naud, Advisor to President Jovenel Moïse, of Charles Jean-Jacques, National Authorizing Officer and businessman, André Apaid is currently on an official visit to Doha, Qatar to respond to an invitation from his colleague, Mohammed bin Abdulrahman bin Jassim Al Thani, Deputy Prime Minister and Minister of Foreign Affairs. The mission is to assess bilateral cooperation, discuss investment, ways to support and develop them, and issues of common interest.

This Embassy will be responsible for the Gulf region. The approach is to have a much more diversified foreign policy taking into account other geographical poles in order to have a broader horizon in our quest for Foreign Investments.

Like the President of the Republic, Jovenel Moïse, I believe that Haiti will not be able to progress economically without foreign investment in the form of an economic partnership with the spin-offs of job creation, wealth creation and the strengthening of local SMEs.”