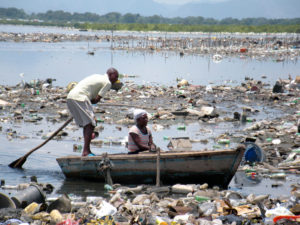 This circular is partly from a letter to an old friend about a desire that we both have – to see Haiti blessed with better things through the Christians of Haiti. Christians should be involved in public education through Radio National, Tele National, TLC, MBCH, UEBH, UEBSH, CEEH, the Federation Protestant, and all other evangelical associations. Reforestation is great, but without changes in use of charcoal, it’s ‘lave men, siye a-te’.

1) TRASH – I’ve been telling our TLC graduates that we must get the word out to Haiti’s Christians – a huge part of the society – to lead in cleaning up the environment and in better cooking ways. Charcoal is a deadly curse, and the trash everywhere makes Haiti internationally despised. From childhood, I’ve heard “After godliness comes cleanliness.”

Ancestors used castor bean (maskiti) and banana leaves and casually discarded them. The leaves became animal food or compost. In the 1940’s, paper wrapping was used and drinks were sold in reuseable glass bottles, then plastic was introduced. The untrained people from palace to Cite Soleil just drop trash everywhere, creating a national dump that has soiled beaches all-over the Caribbean and caused the people and the nation of Haiti to be seen as trashy.

2) ONE REMEDY – USE OF DISCARDED PAPER – An American was awhile with us. He and I had equipment collected from people experimenting with paper brickettes to replace charcoal. The brickettes proved very effective and cheaper than charcoal, but poor people adapt by only observing, not by experimenting. The experiment was too limited in exposure to the mass. I regret that I didn’t have time to follow up. To make brickettes, paper is wet, then compressed with high pressure in a mold, and dried. They burn very hot in a traditional brazier / recho, and cost only the purchase of a press, and labor.

3. OTHER REMEDIES – RETURN TO GLASS BOTTLES & BAN PLASTICS that don’t discintegrate naturally. South Africa was first to start such an effort..

USE SOLAR STOVES. Any intelligent person can use a solar stove without ruining it by rough handling.

4. PROPAGANDA – When we arrived in Haiti, to curse a man, one snarled “Haitian !” and he withered. Papa Doc cured that in making active citizens out of subjects through the VSN and community councils. The people of Haiti learned to have PRIDE, but need to learn a desire to have a better image. The church can lead in teaching cleanup and burning of trash, and making of brickettes. Our TLC graduates and the church of Haiti need to grab the baton and win the race with trash and deforestation!

Love in Christ to all, Wallace