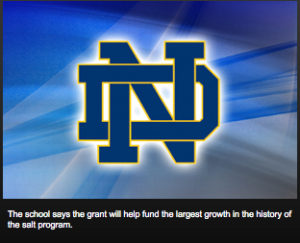 South Bend, Ind. – The Notre Dame Haiti Program at the University of Notre Dame has received a large, anonymous grant that will support the growth of its salt program, which produces clean, co-fortified salt, intended to eliminate lymphatic filariasis and combat iodine deficiency disorder. The $375,000 grant will be matched by other donations and, in conjunction with several other resources, will fund the largest growth in the history of the salt program.

Jim Reimer, project director of the salt program Bon Sel Dayiti, said, “These funds will enable the second phase of our long-term expansion plans to provide ‘clean salt that brings healing’ to the people of Haiti. This phase, in particular, will double our processing and fortification capacity, add a raw salt brine-washing system and consolidate most operations – storage, processing and packaging – at one site. We are excited about this new milestone in the salt program and are deeply appreciative for those who have made this possible.”

The salt program is one of several important activities managed by the Notre Dame Haiti Program, founded two decades ago by Rev. Thomas Streit, C.S.C., a priest in the Congregation of Holy Cross. Among the other activities are:

Mass drug administration (MDA), which is executed annually thanks to the generosity of corporate and foundational partners, and which targets almost half the population of Haiti with two drugs designed to prevent the parasitic worms that cause lymphatic filariasis (more commonly known in some circles as elephantiasis) as well as intestinal worms.

A robust monitoring and evaluation program led by lead researcher Father Streit, addressing the progress of both MDA and salt in eliminating lymphatic filariasis.

A clinical partnership with a local hospital in the Leogane area, 25 miles west of Port-au-Prince, where the prevalence of lymphatic filariasis has been the highest, and where wound care and psychosocial counseling help those afflicted with the disfiguring disease to regain their self-esteem, adapt to their physical challenges and remain productive members of the local community.

Continued advocacy to eliminate this and other neglected tropical diseases, possible only through the partnerships and the benevolence of the Notre Dame family.

Earl Carter, managing director of the Haiti Program, said, “This timely and extremely generous grant will allow us to take production of clean, co-fortified salt to an entirely new level, and in doing so, ensure that future generations of Haitians will have not only improved intellectual capability, but will also be able to live without the threat of this demoralizing and disfiguring disease. We are deeply indebted to these long-term partners of our program.”