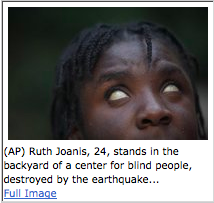 PORT-AU-PRINCE, Haiti (AP) – The aid flooding into Haiti by plane and boat is not reaching earthquake victims quickly enough to stem growing unrest because of transportation bottlenecks and isolated violence.

Many foreign aid workers and Haitians say ample donations are arriving, but express frustration at the slow pace of distribution of food and medicine from Port-au-Prince’s port, airport and a warehouse in its sprawling Cite-Soleil slum.
“There’s no top-down leadership. … And since the Haitian government took control of our supplies, we have to wait for things even though they’re stacked up in the warehouse,” said Dr. Rob Maddox of Start, Louisiana, tending to dozens of patients in the capital’s general hospital. “The situation is just madness.”
U.S. air traffic controllers have lined up an astonishing 2,550 incoming flights through March 1, but some 25 flights a day aren’t taking their slots. Communication breakdowns between Haitians and their foreign counterparts are endemic.

“Aid is bottlenecking at the Port-au-Prince airport. It’s not getting into the field,” said Mike O’Keefe, who runs Banyan Air Service in Fort Lauderdale.
Boxes of supplies are stacked to the ceiling in the dimly lit warehouse of the capital’s hospital. In another storage area, medicine, bandages and other key supplies pile up on tables – watched over by a Haitian health worker who scrawls in a notebook, ticking off everything that comes in and out. Doctors say since locals took over the supply room, crucial time to save lives has been lost filling out unnecessary forms.

Donors talk about key logistical challenges: Grappling with a barely functioning government, the backlog of flights, a damaged and small port, clogged overland routes from outlying airports and the Dominican Republic, and security.
Aid agencies say food and water deliveries have about doubled in the past 10 days, but some relief workers are frustrated at how long it takes to move other supplies out of the U.N.’s warehouses.

U.N. officials said Tuesday that more than 100 ships are en route to Haiti, but the capital’s port has limited capacity. Ships need their own cranes and other offloading equipment.

(AP) Ruth Joanis, 24, smiles after an aid distribution in a center for blind people, damaged by the…
Full Image
Traveling from the airport on the eastern edge of the capital to the western side of the city can take more than 3 hours. Travel by night is largely out – there are few functioning street lamps and, once the sun sets, countless survivors sleep in the streets.
Haiti has been plagued with crime, violence and gangs in the past, and some aid workers worry about being ambushed.

Most aid convoys require armed escorts, like the one that fired guns to drive away 20 armed men who blocked a road and tried to hijack a food shipment in the southern town of Jeremie. U.N. and Haitian police on Tuesday arrested 14 people suspected of participating in Saturday’s attack, the U.N. said.

Mobs have also stolen food and looted goods from their neighbors in tent camps, prompting many to band together or stay awake at night to prevent raids.
Small groups of state employees and lawyers held protests across the capital Tuesday, denouncing President Rene Preval’s leadership. Prime Minister Max Bellerive defended the government’s performance, saying, “even the most advanced countries could not respond to this crisis.”

(AP) A man and a baby sit outside a makeshift tent at the camp inside the National Stadium of…
Full Image
The Jan. 12 disaster killed at least 150,000 people and demolished virtually every government building in the capital. Some 1 million people are homeless, many huddling in crude tents and bed sheets.

To lessen confusion, the government has asked private aid organizations to register with it so it knows what they’re doing and where.
Relief organizations are finding ways around the bottlenecks.
At the port, the American Red Cross created a “boat bridge” to unload supplies from a Colombian Red Cross ship offshore, said David Meltzer, the group’s senior vice president for international services.

The U.S. military has managed to land between 120 and 140 flights a day at Port-au-Prince airport, which handled 25 planes daily before the quake, Air Force spokeswoman Capt. Candace Park said.

(AP) Men carry the body of 24-year-old Sergeline Joseph after they were paid by her father Thomas…
Full Image
One way to avoid backups is to buy aid in Haiti, said Edward Rees, whose nonprofit Peace Dividend Trust in Haiti is pressing donors to purchase local goods and hire local workers.

Rees said he met Tuesday with a rice supplier “who is aghast at all the rice being flown and shipped in, when his warehouses are still half full.”
The World Food Program, which coordinates logistics of food delivery among relief groups, has significantly expanded its truck fleet, said spokesman Marcus Priory.
“We have been facing the most complex operation we have ever had to launch because we have massive needs (and) a densely populated urban context, which is not a traditional operating area for a humanitarian mission,” Priory said.
—
Associated Press Writers Frank Bajak and Michelle Faul in Port-au-Prince and Martha Mendoza in Mexico City contributed to this report.