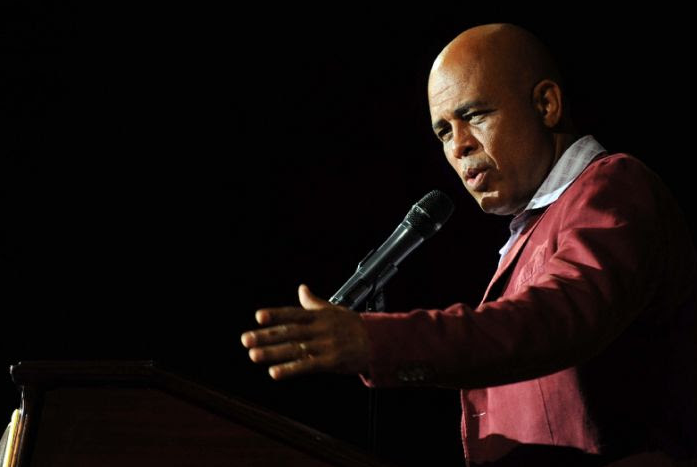 “The world is counting on you,” Haiti’s former president, Michel Joseph Martelly, told an audience of Claflin University sophomores on Thursday.

At Claflin, he explained that although the Caribbean island nation is known as a poor country, the good things have been kept quiet.

“In 1804, we defeated the biggest army, the French army, and the slave became free. And this is something they don’t say too often. We all know the story behind Nelson Mandela, behind Martin Luther King, but we forget about Haiti … in 1804, when we redefined the word ‘liberty’ and allowed the black to be free.”

He told the story of a boat full of slaves from another island who went to Haiti because it “was the symbol of freedom.”

“Because once you stand on Haitian soil, you become free,” Martelly said. “Haiti has done a lot for us, for humanity.”

During the time of slavery, Haiti’s wealth was taken from it by bigger countries, he said.

“And we are still suffering from it.”

Martelly was born in 1961 and finished high school in 1982. He came to America for college but never graduated, which he called his biggest regret.

He returned to Haiti where he embarked upon a musical career. He became the leader of a dance band and performed under the name “Sweet Micky.” Famed for his outlandish live performances, he earned acclaim as an innovator in the Haitian dance music known as “compas.”

“I became the hottest thing in Haiti for a while,” he said. A demanding performance schedule had him “dragging back home at 5 in the morning, 6 in the morning.”

“And I saw young kids, as young as 3, 4 years old, (at) 6 in the morning, carrying buckets of water on their head,” he said. “And I was always wondering ‘Why are they in the streets without their parents? Why aren’t they in school?’”

It sparked a deep interest in education. After Haiti’s devastating earthquake of January 2010, he and his wife worked with foundations to raise funds to help. Becoming disillusioned with how the money was used and distributed, he chose to run for his country’s top office.

“I decided to run for the presidency,” he said. “And I immediately focused on education.”

Transforming his country’s educational system was part of his work rebuilding Haiti. He first focused on relocating more than 1.4 million people who were living in tents into permanent housing, and rebuilding the capital of Port-au-Prince and government institutions.

At that time, about 85 percent of Haiti’s schools were private “in a country where about 60 percent of the population is unemployed,” he said.

Six months into his term, “I was able to already create the means to have free education,” he said.

With financing that came from telecommunications fees, he was able to eventually provide free primary schooling for more than 1.2 million children, Martelly said.

“And we were able that first year to bring about 750,000 kids to school for free,” he said. “That was something major in the country.

“Over the years, we’ve been able to bring more kids to school and to rebuild about 500 school (buildings) that were destroyed during the earthquake.”

He said that he so strongly believes in the value of education because it’s “the only way to create a society, a family, that can really change your world.”

“And that is what brings me here today, to talk to you (about) the future of the world, to tell you that you are in the right place and that you are doing the right thing.”

“What is the state without the people? It’s an empty space,” he said. “Look at the difference between one person and the other. Things change overnight based on who’s leading.”

He called on the students to be leaders and to passionately pursue their chosen careers, “to dream, to dare.”

“Because your future depends on you. Nobody else,” he said.

Claflin student Cecillia Hackett was impressed by Martelly’s lecture. She is majoring in business administration and philosophy and religion.

“It was very inspirational, very inspiring, especially to minorities,” she said. “This is an HBCU. A lot of times we feel hindered, we feel blocked, and even sometimes we feel like we can’t move forward.

“And so when we hear that people have overcome those obstacles, such as the former president of Haiti, it really inspires us and leaves us with more of an engraving on our heart to do more, change and bring forth what we want to see in the world.”

Biochemistry major Jessica Tolbert was similarly affected by the speech.

“It was wonderful. I enjoyed how he was basically talking about creativity and the necessity of being yourself and adding that flair to whatever you do, whether that’s being a lawyer or a scientist or whatever,” she said. “It was really inspirational.”