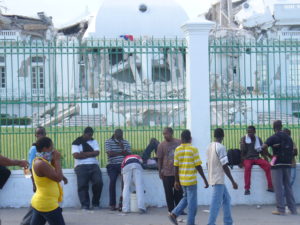 Some American forces are already in this devastated country.
.
Expect 10,000 more in immediate future, along with American engineering troops.

The recent Preval crimes were too much for the International Community.

His wife, Elisabeth Delatour-Preval may be the subject of criminal indictment within the American legal system, along with several other Preval associates. This follows along the line of the recent TELECO arrests for embezzlement and money-laundering.Interest is focused upon several offshore banks. The Hong Kong & Shanghai Banking Company is of special interest since evidence has appeared, showing some Haitians and Haitian-Americans have deposited millions with this organization. Several American governmental agencies are investing the possibility of criminal charges.

Two US  Navy Sikorsky attack helicopters circled downtown Port-au-Prince this afternoon, along with a number of others from the Dominican Republic and the US Coast Guard. A large American naval vessel is offshore with another expected tomorrow. A steady stream of transport aircraft circles the city for landing at the airport.

On Saturday, there was an emergency at the International Airport. It seems as though the Americans took charge and then refused landing permission for two French aircraft carrying relief supplies for Haiti’s desperate people. Although they declared an emergency, because of low fuel, they were diverted elsewhere. It seems as though this stupid action was a part of the security precautions for Hilliary Clinton’s visit.
With friends like these, who needs enemies?

The recent Preval actions, after the disastrous earthquake, were the final straw.

If the International Community had not acted, the Haitian people would have taken action. They have always hated Preval who was forced upon Haiti, as President, via the direct interference of MINUSTAH’s Brazilian and Chilean representatives. Preval only got 21 percent in the 2006 presidential ballot. Chile and Brazil increased this to 51 percent in order to avoid a run-off in which their man, Preval, would have been defeated.

21 thoughts on “FLASH…THE HAITIAN RUMOR MILL.. Rene Preval has signed his resignation, agreeing to step down as President Of Haiti.”