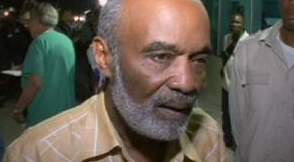 One might think this is a April Fool’s Joke but he will make the request on March 31, instead of April 1, 2010.

This, along with most of Preval’s other ploy’s is unconstitutional. Parliament will expire, leaving Preval to Rule by Decree. In effect, as in January, 1999…Preval will become a dictator, free to modify the Constitution or hang on forever.

No one serious about Haiti’s survival can give the suggestion of a one day prolongation, let alone an 18 month prolongation any consideration at all.

Haiti needs a charismatic leader to put the MOB on the street.

10 thoughts on “FLASH-FLASH-FLASH March 30, 2010 PREVAL WILL SEEK AN 18 MONTH EXTENSION FOR HIS ALREADY DISASTROUS, DO-NOTHING PRESIDENCY.”