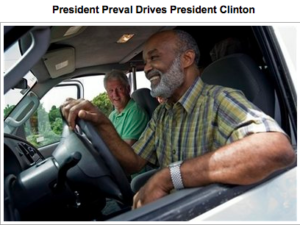 Port-au-Prince, Haiti (CNN) — You hear it all the time in Port-au-Prince: “That’s Haiti,” people tell you when things move slowly, when the electricity goes off or traffic mysteriously comes to a halt. Some say it was like that even before a devastating earthquake reduced most homes to a few hours of power from a generator and made some streets impossible to pass.

Today we followed a group of American relief workers to the airport to pick up several tons of donations. They were expecting tents, food, heavy equipment to help them rebuild and repair. Relief supplies had been flowing freely from the airport since the earthquake. Rescue workers had been able to avoid customs delays and taxes imposed on foreign imports.

But when we arrived at the airport, the whole system had been upended. A doctor from Milwaukee was screaming through a fence at customs officials. She had come for six days with plans to treat 300 patients a day. She had been in Haiti three days and her medicine was still being held. “We were bringing in medical equipment as well as medicines and we have nothing. We don’t have anything to see the patients we’re supposed to see,” she said.

Customs would not budge. They showed us an order from the Ministry of Economy and Finance outlining a new procedure for getting supplies into the country. Organizations now have to sign over the goods to the Haitian Department of Civil Protection which will review their request to get a tax exemption before releasing the goods. We called the ministry and they told us the government is trying to prevent businesses from getting goods in tax free under the guise of being relief organizations. They are after crooks and people sneaking in contraband.

But Terry Nelson from Light Ministries said he was told the only way to get his tents is to pay the tax. “We’re giving stuff away. We’ve been here for 28 years and we have to pay to help their people,” he said. He did not know the cost. “I’m trying to find out,” he said. We left him there waiting on 250 tents on a week it had started to rain.

Bill Manassero of Maison de Lumiere came to pick up 6 tons of donated goods and was told it could cost him as much as $10,000 unless he was willing to sign it over to the government and await approval. “We had a bunch of things shipped to us to help repair houses, tents to give away to people who need homes and right now we can’t get our things out of customs because they’re telling us we have to take all the things that are ours and declare it over to the government and give it to them as a gift and they will give it back to us at some point — we don’t know when,” he said.

No one trusted they would get their goods back. And no one has time to wait. The Maison volunteers leave at the end of the week. So if Manassero waits, he may not get his cement mixer in time for his volunteers to rebuild his wall. He’s in the same boat as the doctor who may not be able to treat her patients. The government says they have changed the rules because the “emergency situation” is now over. But it’s not over to them.

I asked customs to explain why this new process is stalling relief work. “I just want to understand why people when they come to get their things have to pay so much money. Why a tax? It seems if you’re donating things like tents or food they should just be donated. There’s not one person in this building who can answer the question why tents can’t be donated,” I repeatedly asked the customs director. No answer. That’s Haiti.

Last night we had a deluge as the skies opened and dropped several inches of water on Petionville and surrounding districts. Water flooded down the streets, filling them wal-to-wall in rushing water that carried 9 inch bolders along with the torrent.

Some say 100,000 refugees are camped around Petionville in any and all open spaces. The Park  Saint Therese, a local soccer field, host something like 5,000 people in shelters made of cardboard, bed sheets and – for some lucky ones – plastic sheeting. A few tents add more secure spot to the sea of misery.

Within moments this area was flooded with garbage and plastic debris floating on the rapidly deepening water. The same situation prevailed in the park directly in from of the big Saint Pierre’s church. One of the lucky families had a shelter with a plastic tarp as a floor, to keep the wet ground from making things impossible. This plastic sheeting acter as a collection basin for the floodwaters. Two babies were drowned. The mother had stepped out to get some water for drinking purposes and found disaster when she returned a few minutes later.

And now is the time that President Rene Preval has moved to effectively block customs and steal all of the relief supplies. As of today, all imported material must be signed over to the government and the government will control distribution.

They did this in 2008 when Gonaives and other towns were obliterated by 4 hurricanes. Preval, and his fellow criminals, sold the relief material to the highest bidder. Gonaives remains much as it was in 2008.

Since the first moments, after the January 12 quake that killed at least 300,000 – possibly 500,000 Haitians, Rene Preval has moved to steal everything. A week ago he stole $90,000,000 from a special fund set up by Chavez and other area leaders. We know the bank officials who handled the electronic transaction.

Immeditely after the quake, Preval gave Dimitri Vorbe a contract to buy food packages at $20.00US each. They went to the Dominican Republic and bought time-expired material for $2.00 US per unit and changed the dates. That gave them $36,000,000 on a $400.000 investment.

Dimitri Vorbe effectively controls customs at the airport. And now Preval  has moved to block all imports, unless the owners give Title to the government.

It is really time for the International Community to do something. It is responsible for giving Haiti to Preval…when he got less than 23% of the votes in the 2006 presidential election. Brazil and Chile are effectively responsible for turning Haiti over to the Criminal Preval and his band of thieves.

Now is the time for the International Community to remove Preval from power and hold him responsible for his crimes in a court of Law. There should be no exile, for Preval and his fellow criminals, with their fortunes intact. Cancel their visas and make them face the people of Haiti.