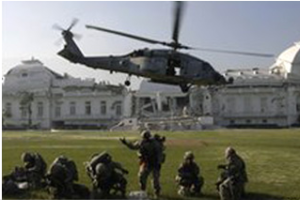 In response to a request by the government of Haiti, the U.S. government deployed a military contingent to support relief efforts following a 7.0 earthquake that devastated Haiti’s capital city of Port-au-Prince Jan. 12.

The redeployment comes as relief efforts take on a new focus and responsibilities transition to UN, NGOs and non-DOD agencies.

“As we adjust our forces here in Haiti, we are evaluating the conditions on the ground as relief efforts transition,” said Lt. Gen. Ken Keen, Joint Task Force Haiti commander. “Redeployment of capabilities is not time-based, we will redeploy our forces as their functions are assumed by interagency or non-governmental organizations or the tasks are no longer required.”

The 2nd BCT, 82nd ABN, a rapid-response force trained and ready to deploy anywhere in the world, arrived Jan. 14 and played a key role in the early stages of relief. Working side-by-side with Brazilian-led United Nations Stabilization Mission in Haiti, Haitian national police and a variety of relief agencies, the more than 400 Soldiers of the 1-73 CAV provided security support for four food distribution points in the Petionville area. Their support enabled relief organizations to distribute more than 5.5 million pounds of bulk food. Security at the distribution sites is now provided by Nepalese and Jordanian forces assigned to MINUSTAH. The paratroopers also supported security operations for the Hotel Montana, Port-au-Prince airport, the seaport and embassy.

Additionally, the Soldiers distributed more than 45,000 meals and 250,000 liters of water. Medics with the unit treated more than 7,000 patients, medevaced more than 147 and delivered 10,000 shelter kits.

Troop reductions will continue as UN forces, NGOs, international partners and the Government of Haiti assume responsibility for military-supported tasks.

Now that the initial mass casualty crisis has been mitigated, U.S. medical capabilities are in less demand.

A recent UN Office of Humanitarian Assistance report states only 10 percent of overall health care is provided by U.S. military medical teams due in large part to the reopening and staffing of 91 hospitals in the capital city and surrounding area. Of those, 56 are in Port-au-Prince and have surgical capacity.

1 thought on “First U.S. Paratroopers to Return From Haiti”