Explore the Timeless World of Vodou, Deep Within the Caves of Haiti 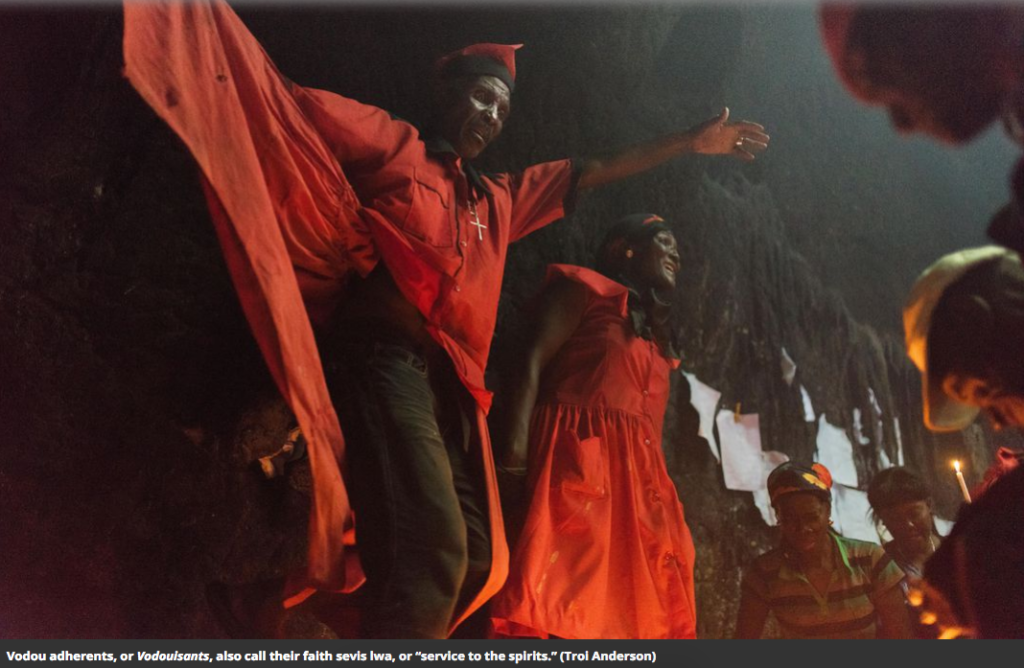 It was the height of the summer solstice, the brightest day of what had already been a long, hot year in Haiti. But deep within the caves outside Saint-Michel de l’Attalaye, beneath the mountain-ringed northern edge of the island nation’s central plateau, there was no light. Troi Anderson had to feel his way along the cool limestone walls and follow the worshipers’ singing to find his way to the Vodou ceremonies below. A photographer based in Oregon, he had come for the pilgrimage of St. John, an annual event that generally draws hundreds of participants. 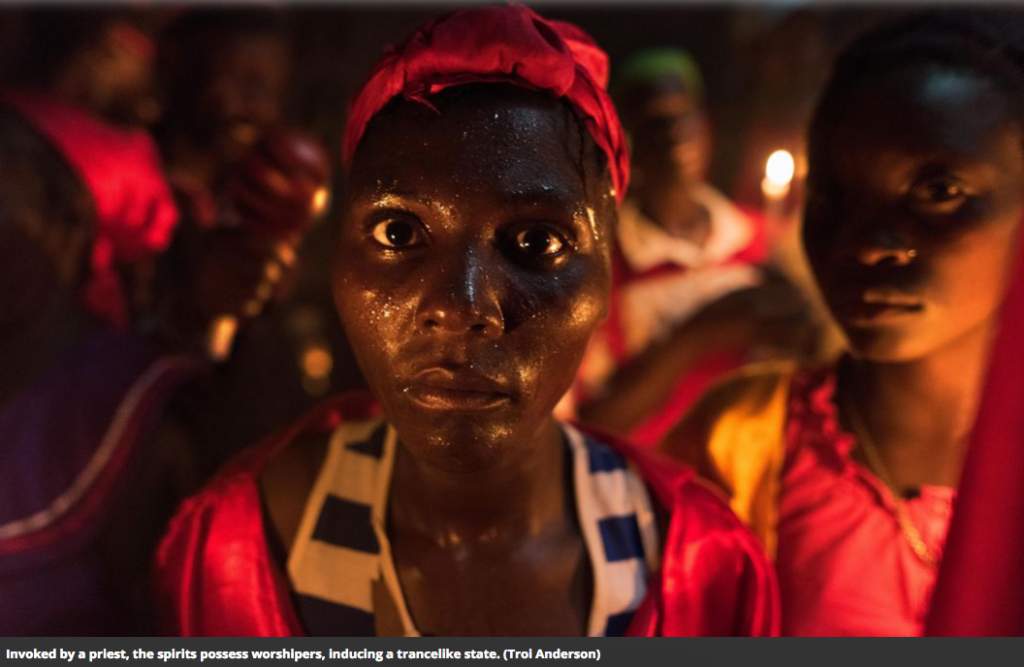 Anderson had once worked with a major aid group on the island, and as he photographed people on Haiti’s streets, he noticed their suspicion and came to share their distrust of what he calls the “poverty industry,” or those aid efforts better at serving themselves than the people they’re supposed to help. So he left that work behind and focused instead on images of Haitian pride. That led him to the “sacred theater” of Vodou, a uniquely Haitian cultural force. 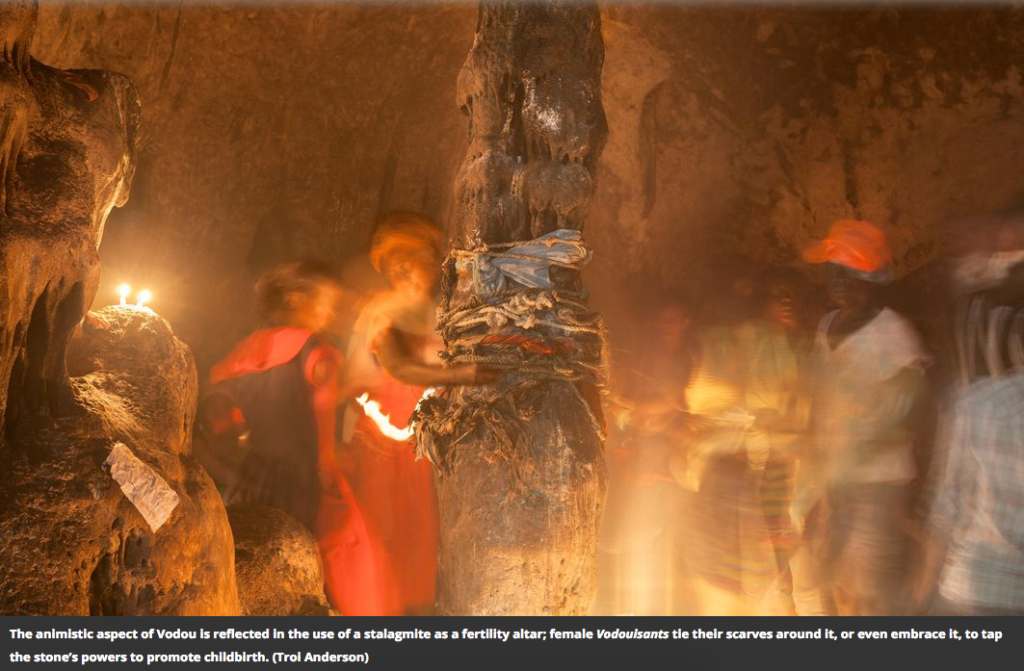 Vodou has roots in the religious traditions of West and Central Africa, where most Haitians’ ancestors were born, and in the Roman Catholicism of European colonizers in Africa and the French who colonized the western third of the island of Hispaniola in the 17th and 18th centuries. Its beliefs and practices were forged in one of the most brutal slave regimes the world has known.

The religion honors a supreme creator god who is considered too remote to reach directly. Worshipers venerate intermediary spirits, such as the orisha gods of the Yoruba people who inhabit what is now Nigeria, Benin and Togo, and figures from Haitian history. The faith is decentralized. It is practiced creatively, not prescriptively, which helps to account for the differing forms practiced elsewhere, such as in New Orleans. Like many great religions, throughout its history Haitian Vodou has provided both solace and an intimate sense of community to the oppressed.

Ruling interests often saw it as a threat. It wasn’t just the French slave masters, who condemned practitioners to the whip and branding iron, and priests to death, as they sought to put down slave rebellions. The black military leaders and elites who led Haiti after they ejected the French in late 1803 also tried to suppress the faith, mandating imprisonment and fines for participating in Vodou ceremonies and working at times with the Catholic Church to eradicate “superstition.” As historian Kate Ramsey has written, these leaders felt they had to “assert Haiti’s ‘civilization’ and ‘progress’ in the face of the republic’s diplomatic isolation and exclusion following independence.”

This sense of Vodou as a primitive practice also shaped American impressions of Haiti. The U.S. military occupied the country from 1915 to 1934, during a formative period in the U.S. empire-building in Latin America and Asia. Marines who served on the island, and journalists who covered them, returned with lurid tales of what they called “voodoo” and characterized as black magic. Pop-culture distortions, in both books and films, weren’t far behind. In 1932, the year after Bela Lugosi starred in Dracula, he played an evil sorcerer in Haiti named “Murder” Legendre in White Zombie.

Those perceptions persist. In 2010, two days after the catastrophic earthquake that killed up to 316,000 people in and around Port-au-Prince, New York Times columnist David Brooks blamed “the influence of the voodoo religion” as first among a “web of progress-resistant cultural influences” that had made Haiti vulnerable and impoverished.

But Vodou has won respect, if grudgingly. In 2003, the Haitian government formally recognized it as an official religion alongside other faiths. Precise statistics are hard to come by, but it is commonly estimated that more than half the Haitian population practices it.

Many Vodouisants refer to their faith as sevis lwa, or “service to the spirits.” Ancestor worship is a bedrock element of the faith. So is trance possession by the spirits, which is aided by the complex, sacred rhythms of master drummers. The sacriﬁce of chickens, goats or cows is also widely practiced, with the animal intended to replenish the life-giving energy of the universe. The meat is usually distributed among family and friends.

The Vodou calendar is filled with pilgrimages, often coinciding with Catholic saints’ feast days, to sites around the country. Around Easter, the faithful, robed in white, pay homage to the spirits near the sacred site of Souvenance. In summer, thousands flock to a towering waterfall where the Virgin Mary (also venerated as Ezili Danto, a goddess of love) is believed to have appeared. It was this pilgrimage tradition that attracted Troi Anderson to Saint-Michel de l’Attalaye last year.

Inside the caves, the floors were slick with the blood of past sacrifices. Occasional beams of light streamed in through holes in the limestone roof. In the darkest recesses, candles cast orange light onto walls that fluttered with small papers bearing written prayers. A woman dressed in red held up a chicken—an offering to Ogou Feray, a god of iron and war, a divinity drawn directly from West African traditions and often represented by the icon of St. James the Greater.

Some sang to spirits such as Damballah and Ayida Wedo—the snake and rainbow—and Baron Samedi, spirit of the dead. A woman’s voice rose to praise the spirit of the forest as a chorus chanted behind her. Other pilgrims sang of ritually cleansing themselves with river water. Some went into trances, their bodies providing a medium for lwa to dwell in the caves.

Anderson trod lightly. He had come without a flashlight, to avoid disturbing the ceremonies, and he kept his silence as he worked and the worshipers prayed. “I tried to follow a request by one of the pilgrims,” he said. “He told me not to photograph the people here, but instead to photograph the spirits.”