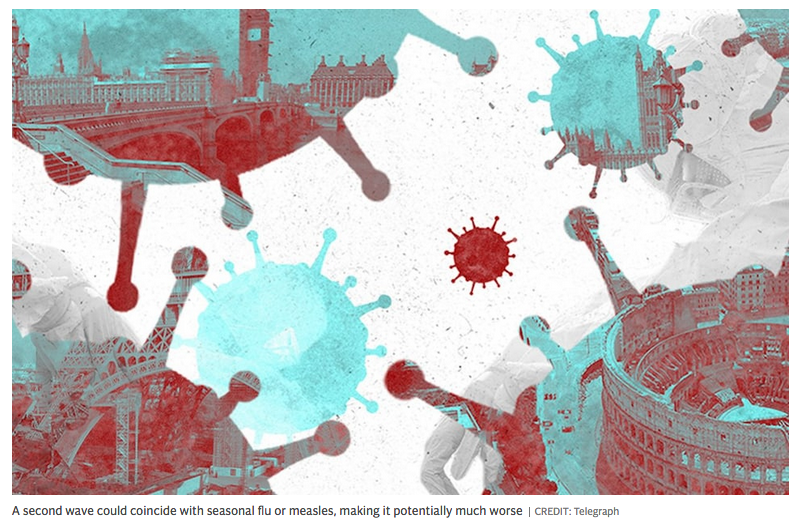 European countries should brace themselves for a deadly second wave of coronavirus infections because the pandemic is not over, the World Health Organisation’s top official in Europe has said.

In an exclusive interview with The Telegraph, Dr Hans Kluge, director for the WHO European region, delivered a stark warning to countries beginning to ease their lockdown restrictions, saying that now is the “time for preparation, not celebration”.

Dr Kluge stressed that, as the number of cases of Covid-19 in countries such as the UK, France and Italy was beginning to fall, it did not mean the pandemic was coming to an end. The epicentre of the European outbreak is now in the east, with the number of cases rising in Russia, Ukraine, Belarus and Kazakhstan, he warned….

So officials would be well served by using this lull to their advantage by bolstering local hospital systems, the Telegraph reported. Kluge hailed Singapore, Japan, and Scandinavian countries as models, saying, “They don’t exclude a second wave, but they hope it will be localized and they can jump on it quickly.”

Another point of concern, Kluge said, is that a subsequent coronavirus wave could overlap with a resurgence of other communicable diseases, according to the Telegraph.

“I’m very concerned about a double wave,” he said. “In the fall, we could have a second wave of COVID and another one of seasonal flu or measles.”

England’s Chief Medical Officer Chris Witty echoed the sentiment, using the 1918-1920 influenza pandemic as an example. The pandemic emerged in March 1918, but returned with full force in the fall, killing some 50 million people, the Telegraph said.

“We know from history that in pandemics the countries that have not been hit early on can be hit in a second wave,” Kluge said. “What are we going to see in Africa and Eastern Europe? They’re behind the curve.”

Klug e’s warning comes as European nations begin to resume some semblance of a normal life.

Some German restaurants have resumed business and France has stopped requiring people to show travel permits that explain why they left their homes, according to the Telegraph.

In Spain, groups of up to 10 people can meet, bars and restaurants have reopened outdoor seating but at half their maximum capacity, small shops are back in business, and movie theaters and museums can welcome guests, albeit at a reduced capacity, BBC reported.

As of Monday, restaurants, bars, hair salons, shops, and churches in Italy can reopen their doors, so long as people maintain social distancing from each other.

But without an anti-viral drug or vaccine to treat the coronavirus, Kluge said the loosening of restrictions has to go hand-in-hand with widespread testing and contact tracing. Face masks and social distancing are also important.

“Some countries are saying, ‘We’re not like Italy’ and then, two weeks later, boom — they can unfortunately get hit by a second wave, so we have to be very, very careful,” Kluge told the Telegraph.