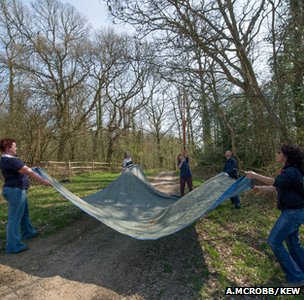 Ash, a common sight throughout most of the UK, is one of the tree seed collection’s priority species

The UK’s first national collection of tree seeds has been established, which scientists say is crucial as a growing array of pests threaten native species.

Co-ordinated by Kew’s Millennium Seed Bank, it aims to safeguard the genetic diversity of the UK’s tree flora.

The scheme will initially target 50 native species, including the common ash, which is under threat across Europe from ash dieback.

The project’s funding has been provided by the People’s Postcode Lottery.

“In the last 10 years, we have seen an increasing threat to our trees from many newly arrived, often very aggressive, pests and diseases,” explained Paul Smith, head of Kew’s Millennium Seed Bank.

“In 2013, almost all of our favourite tree species – from oak to beech and ash – are affected.”

Researchers involved in the collection will focus their efforts on 50 species, which have been selected and ranked according to a range of criteria, including conservation status, prevalence in the landscape and vulnerability to pests and diseases.

“We currently don’t have such a facility, and the UK is unusual in that, where you have access to a wide range of diversity in one place,” Dr Smith told BBC News.

“We send out seeds all of the time all over the place, as well as in the UK, so it is ironic that we do not have comprehensive collections for the most important trees in our landscape.”

In partnership with the Forestry Commission, the scheme will collect seeds of the prioritised species from 24 seed zones, identified by the commission, across the UK.

A species will only be considered to be fully represented in the national tree seed collection when it has been collected across its distribution or from all genetically distinct populations.

Dr Smith observed: “We have looked at our native species first because they are out there in the landscape and many of them are vulnerable.

“New pests and diseases have come into the UK, so there is an urgency related to that.

“In terms of genetic diversity, although we have the vast majority of tree species in the seed bank, we only have one or two collections from each [species] so you are not sampling right across populations.

“One thing that ash dieback has made clear is that only a subset of the UK population may have resistance, so you really need to be collecting right across the genetic spectrum in order to be able to provide a wide range of material for screening purposes.” 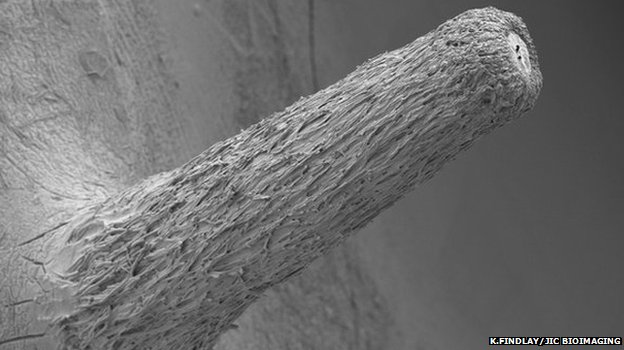 The fungus behind ash dieback was first recorded in the UK in 2012, threatening to wipe out the nation’s ash trees

Since being recorded in the UK’s wider environment for the first time in 2012, ash dieback had propelled the issue of tree health into the headlines.

“The benefit of this method is that the sample is imaged in as close to its natural state as possible, providing the best quality 3D view of an organism and its topography,” explained JIC researcher Prof Allan Downie.

“We want to understand how the fungus makes the fruiting bodies (toadstools) that produce the spores.

“We think the spores cause infection of ash. We think the fungus growing within the ash leaf stem produces sex organs and that the images show such an organ.”

Dr Robin Probert, head of conservation and technology at Kew’s seed bank, explained why ash was listed as one of the collection’s priority species.

“We need to collect multiple populations of ash throughout its range in the UK in the hope that we will find disease-resistant populations,” he told BBC News.

“If we have that material and it is stored here, then it means that it is available for people to carry out that research to check for disease resistance and perhaps use that material as starting stock for strains that can be replanted back into the wild.

“It is the same story for all the other tree species that we are looking to collect and preserve. Until now, there has not been a push to build up a full genetic representation of important tree species, and ash happens to be one of them.”