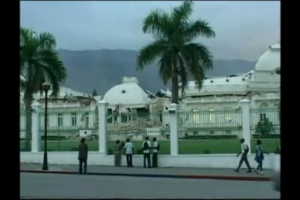 A very powerful earthquake, with a magnitude of 7.3, hit the country of Haiti on Tuesday. It has been reported that a hospital has collapsed and other buildings have been damaged. Casualties have not yet been reported. A tsunami watch was posted for Haiti and parts of Cuba, the Dominican Republic and the Bahamas.

The earthquake was centered approximately 10 miles west of the capital of Port-au-Prince, according to the U.S. Geological Survey (USGS). There were two aftershocks noted. An aftershock is an earthquake that occurs after a previous earthquake, the mainshock. An aftershock is in the same region of the main shock but always of a smaller magnitude.
Just three days ago the USGS reported a 6.5-magnitude earthquake that struck off of California’s northern coast at approximately 4:30 pm PT on January 9, about 25 miles from Eureka.
Today’s earthquake in Haiti is considered “major”. An earthquake that measures 7.0-7.9 on the Richter scale can cause serious damage over larger areas. There are, on average, about 18 earthquakes in this range per year.
Written by Cheryl Phillips HULIQ.com
sources: USGS, CNN, Wikipedia