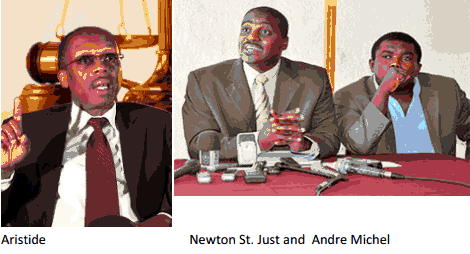 The fact that an autopsy  shows the cause of death to be a stroke doesn’t slow down the lies.  Of course, there was never an autopsy of the newborn baby Aristide sacrificed in March, 2000 in his effort to guarantee the elections, but that’s another story.  If Jean-Juste and Michel want to defend society’s rights, they should demand Aristide’s arrest for this murder in which the baby’s heart was cut out and placed in a jar for later use by Aristide, leader of a Sect Rouge.

Newton St. Juste – Aristide’s personal lawyer – is acting to Aristide’s agenda in an attempt to embarrass the Martelly/Lamothe government and destabilize the Nation.  It is in no one’s interest to have Haiti – yet again – without a government. Unfortunately, like the situation in January, 1999, when Preval decided to rule by decree, and other times with Aristide, the Lavalasians prefer instability and terror to stability and progress.

It is time for all Haitians to work for the Nation’s survival.

It is time for criminals, like Newton  St. Juste to be dealt with, under the Penal Code, and face arrest and preventative detention without access to a cell phone.

Contrary to some vocal idiots, a free and fair poll of the real voting community – those under 25 which make up 54% of the Nation’s eligible voters, will show that they are overwhelming in support of the Martelly/Lamothe team. A recent survey of something near 1,000 students showed over 85% of them in support of the government.

Without exception the major comments were to the effect – LEAVE MARTELLY AND LAMOTHE ALONE. THEY ARE TRYING TO DO SOMETHING!!!

Some of the trouble-makers might get a very bad surprise if they continue with their ill-conceived stupidity  by making these outrageous lies, and comments about the Martelly/Lamothe team. Unfortunately, we are inflicted with the actions of Sophia, Olivier, and the Mayard-Pauls.  Let the courts eliminate them.

Let’s get on with the challenge of rebuilding our nation, in spite of Aristide’s effort to derail things via his surrogates like Newton St. Juste and Andre Michel.

Perhaps it is time to publish these guy’s addresses and suggest the voters pay them a visit to express their feelings.

In Aristide’s Democracy, they would be carrying old tires, gasoline cans and wooden matches.

6 thoughts on “ENOUGH IS ENOUGH!!! IT IS TIME TO ARREST THOSE PEOPLE WHO CREATE AND SPREAD LIES THAT DAMAGE THE NATION. ARISTIDE ASSOCIATES NEWTON ST. JUST AND ANDRE MICHEL ACCUSE PRIME MINISTER LAMOTHE IN DEATH OF JUDGE JEAN SERGE JOSEPH WHO WAS HANDLING THE CORRUPTION CASE AGAINST SOPHIA MARTELLY AND OLIVIER HER SON. THESE GUYS PROBABLY ACCUSE THE USA FOR CAUSING THE JANUARY 2010 QUAKE!! July 13, 2013”