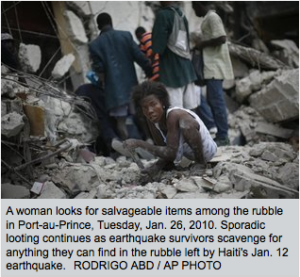 WALNUT CREEK, Calif. — Haiti’s construction industry is to blame for hundreds of thousands of deaths in a tragedy that will repeat itself unless their building practices change, a Berkeley, Calif., engineer said Tuesday.

In one of the first technical reports on this month’s earthquake, Eduardo Fierro, president of BFP Engineers, presented his preliminary findings at the University of California at Berkeley following a week of reconnaissance in Haiti that started just two days after the 7.0-magnitude quake struck Jan. 12, killing an estimated 200,000.

His trip was partially funded by the school’s Pacific Earthquake Engineering Research Center.

“My God, this was not an earthquake disaster, it was a disaster caused by the construction industry in Haiti who didn’t know anything about building codes,” Fierro said.

“These were the people who caused the loss of human life. We have to design things and assume our children and mothers are going to be in the building when the earthquake hits.”

But if Haiti’s construction industry is to blame, an equal amount is shared by a government that offers no building code and no enforcement of building design, he said.

“The engineers there also have no idea what an earthquake is because they hadn’t had a big one there since 1770,” Fierro said.

Fierro, who is an expert in post-earthquake fieldwork and has visited major quake zones in Japan, Armenia, Colombia, Peru and California, said a simple solution to making buildings that won’t fall down in a quake is to offer Haiti’s construction industry a cartoon-style book that shows how to build safely.

“I am originally from Peru, and there we have a cartoon booklet that depicts how to build things,” Fierro said. “This booklet tells the foreman how to put the rebar in and where to put the reinforcements. We have to give them easy technology to rebuild.”

Fierro flew into Haiti from the Dominican Republic on Jan. 14. He spent a week with three companions, sleeping at a construction camp owned by a company building a road outside Port-au-Prince, and touring the damage areas by day, he said.

Most of the buildings that collapsed and buried people were made of heavy substandard concrete or cinder blocks with no lateral supports and supporting columns that were too small in diameter, Fierro said. Those columns were formed of substandard steel, or rebar, that also was too small and smooth, so that it slipped when the earth moved in the quake.

Much of Haiti’s construction concrete is made with beach sand that caused steel reinforcements to rust, he said. The columns supporting most buildings were too small to be able to compact the wet concrete from the top, he added.

People are already starting to rebuild, and they’re doomed to failure if another quake hits, he said.

“They’re building exactly the same thing they had before, reusing the concrete blocks and the same rebar,” he said.

Fierro said one of the reasons the neighboring Dominican Republic did not have much damage from the quake is that the energy from the epicenter went in the opposite direction, putting the lion’s share of the tremor on Haiti.