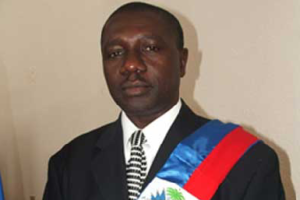 Here is an appointed representative – of President Martelly, one of 10 representing the Palace in each Department. Ex-Deputie/Congressman from Les Cayes, in a big radio interview, criticizing the Martelly/Lamothe government.

Doctor Reginald Boulos shared the broadcast with Fortune and asked why he was trying to destroy the government when we should all be pulling together. Boulos was standing up, for the Nation, while Fortune was set to destroy it.

He has benefited from Parliamentary Immunity behind which he, and several other Deputies and Senators carried on their drug dealing.

Gabriel Fortune was/is one of Aristide’s closest associates and has generated a fortune through the cocaine trade. He has built the super-luxurious $2,000,000  NAMI HOTEL   in Les Cayes. He was a cocaine compatriot of another dealer Daniel Evinx who went into hiding some months ago after a drug deal with Fortune went bad. PNH were involved. A lot of drugs seized.

Haiti became a NARCO STATE under the Aristide/Preval governments and this problem is a major challenge to Laurent Lamothe as the Prime Minister tries to regain some semblance of legality in the Nation.

The DEA should rid Haiti of Gabriel Fortune – and a few others – who are attacking the Martelly/Lamothe government in an effort to destroy security and generate chaos, a smokescreen behind which people like Fortune will be able to move their cocaine into Miami.

This predictable move to destabilize the Martelly/Lamothe government is being funded by  Fortune’s close associate- Aristide – and others who would benefit from Lamothe’s removal.

Unfortunately, President Martelly is caught between a rock and a hard place.

His wife and her family are a major embarrassment to the Presidency and the Nation.

Kiko St. Remy’s recent sponsorship, of public manifestations, against the government, have highlighted this problem.

In the final analysis, where will Michel Martelly’s loyalty lie – to the Nation or the protection of criminal relations?