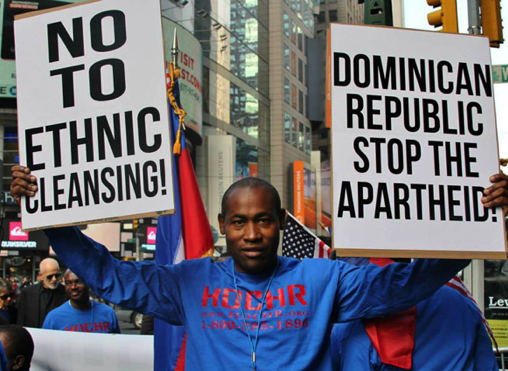 BATEY LIBERTAD, Dominican Republic — As Roberto Rafael remembers it, a Dominican soldier looked him up and down 15 years ago, decided his skin was too dark for a native Dominican, loaded him into a truck and dumped him in the pouring rain into Haiti, a country where he didn’t know a soul.

Rafael, then 15, said he wandered terrified around Ouanaminthe, a Haitian border town 60 miles from his home, before a chance meeting with a friend from the Dominican Republic who happened to be visiting Haiti and who helped contact Rafael’s family. Rafael, born to Haitian parents in the Dominican Republic, eventually returned home after relatives took documents to Haiti to prove his Dominican birth, he said.

“I walked around like a crazy person for hours,” Rafael, 30, said. “Seeing my friend’s face in Haiti was like finding Jesus.”

Rafael now fears he and others like him will face the same old prejudices and suffer the same fate as a recently enacted Dominican immigration law takes hold, spurring a new immigration crisis between the Dominican Republic and Haiti, neighboring countries that share the island of Hispañiola. International human rights activists say such fears are well-founded. Already, they say, dark-skinned native Dominicans and longtime residents report new, eerily similar accounts of deportations from the Caribbean nation.

The roots of the crisis began in 2013 when the country’s Supreme Court ruled that people born in the Dominican Republic between 1929 and 2010 to non-citizen parents do not qualify as Dominican citizens. The decision retroactively stripped tens of thousands of people of their nationality, effectively leaving many people stateless. People born in the Dominican Republic to Haitian parents bore the brunt of the ruling.

While the government created a plan to restore nationality for thousands of people who could prove they were born in the country, many people say they lacked all the documents to prove their citizenship.  Another program grants legal residency to non-citizens — many of them Haitian workers — who can establish their identity and prove they arrived before October 2011. The Dominican government said it would not begin deportations until mid-August, 45 days after the June 17 application deadline. But dozens of people told USA TODAY that Dominican officials deported them soon after June 17. Many of the people deported say they believe officials targeted them for their dark skin.

Dominican officials said race won’t be considered and all residents will get due process in any deportation proceedings.

Caonabo Delgadillo, who heads the division of migration for the northern part of the Dominican Republic, said Haitians and Dominicans have long had close ties and that race is not the issue.

“We don’t have anything against blacks, because we are all black,” Delgadillo said. “There’s no problem. Every Dominican has a Haitian working in their house. I personally have two.”

Josue Fiallo, an adviser to the Dominican ministry of the presidency, told USA TODAY the Dominican Republic will not deport anyone who can prove they were born in the country and will not split up any families. He acknowledged that in the past Dominican officials deported some people without due process, but said a “new generation” of Dominican authorities would individually assess each case. Fiallo denied any deportations tied to the new immigration laws and called it  “outrageous” for activists to say the country is acting out of racism.

The country, he said, is simply abiding by its constitution by ensuring that each person — documented or undocumented — has a path to legal residency.

Rafael and others in this border town say they distrust a government they feel has sown an atmosphere of suspicion in a country still wrestling with discrimination and racism based on gradations of skin tone.

In February, Dominican authorities deported Wilson Sentimo, 25, born in the Dominican Republic to Haitian parents. Dominican soldiers picked him as he hawked fried food to earn extra money on the roadside near his home, he said. He protested, telling the soldiers he was born in the Dominican Republic, but he said they did not allow him to go home to retrieve his birth certificate or contact his family. He said the soldiers deemed him too dark-skinned to be a native Dominican and sent him into Ouanaminthe without food, money or identification.

“I said, ‘I don’t know anywhere in Haiti,’ and they said, ‘Well, you didn’t know Haiti. Now, you will know Haiti,'” Sentimo recalled.

Sentimo’s sister and his employer Jon DiMaio, executive director of an education-focused non-profit organization in the migrant work community where Sentimo lives, learned of his deportation and hurried to the border with Sentimo’s birth certificate. Officials reluctantly freed him, Sentimo said.

Activists say experiences like Sentimo’s illustrate blatant human rights violations and mark the beginning of a crisis. Pierre Garot, president of Collective Organizations for the Defense of the Rights of Immigrants and Repatriates, said the Dominican Republic’s immigration policies is a type of ethnic cleansing. Government officials are trying to classify anyone who is dark skinned as Haitian, no matter where they were born, Garot said.

Fiallo disputes any characterization of the immigration laws as ethnic cleansing, calling such accusations “outrageous.”

Wade H. McMullen, Jr., managing attorney for Robert F. Kennedy Human Rights, a nonprofit that has appealed the citizenship and immigration changes in the Dominican Republic in international courts, said the “sinister” 2013 ruling is an “arbitrary deprivation of nationality” for all Dominicans of Haitian descent and violates the country’s human rights obligations. Deportations can often happen based on how someone looks or sounds rather than their legal status, he said.

“We are worried that Dominican citizens are going to get swept up by mistake and expelled to Haiti, as has happened over the last several months, even as there has been a supposed moratorium on deportations,” McMullen said.

Dominicans without Haitian heritage have lived side-by-side with Dominicans of Haitian descent for decades and often count them among their family members and friends. Many see their government’s changes as unjust and want to help.

Jose Jimenez, 64, of Dajabon in the Dominican Republic, began crying as he considered the uncertain futures of his friends and cousins who are Dominicans of Haitian descent.

Jimenez runs a business in the city’s twice-weekly market where he sells goods to Haitians and Dominicans. He vowed to hide those close to him who are Dominican of Haitian descent if immigration officials come to deport them.

“The situation is not easy,” Jimenez said. “It’s sad because in Haiti they won’t have jobs and they will starve.”