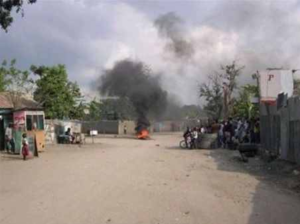 Dajabón, Dominican Republic.- Dominican personnel in the consulate at Ouanaminthe, Haiti, left the premises on safety concerns, as the violent incidents of the last few days in towns near the border with Dominican Republic continue.

Local media report that all nine Dominicans were evacuated in the heels of several protests staged in Haitian towns near the northwestern border.

On Thursday UN Haiti Stabilization Mission (Minustah) forces rescued 14 Dominican truck drivers, who were retained by Haitians protesting against the lack of electricity and water in the city Trou Du Nord, Haiti.

One of the drivers said they were stoned fired upon by enraged Haitians who’ve held them for more than five hours as well, before their rescue by Minustah soldiers.

Nelson Rodriguez, quoted by news source listin.com.do, said a hurled stone injured his foot amid the melee. “They took us out of the trucks and tractor trailers at gunpoint.”

On Saturday two truck drivers sped across the border bridge near Dajabón, where they denounced being fired on by Haitians who allegedly tried to kidnap them.

There were no reports of incidents late Saturday.