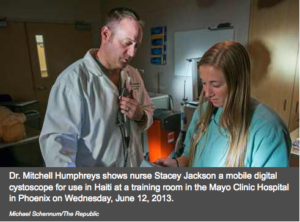 Haiti seems to possess a pull that lures social workers, doctors, adoption agents and others to return again and again.

Mayo Clinic Hospital’s Mitchell Humphreys has no doubt he will return to the country still struggling with basic health-care needs after a 2010 earthquake — even though he visited for the first time this week.

Humphreys is one of six doctors, three nurses and a support staff member who flew to Haiti last week, donating talent and time to treat patients associated with the St. Luke Foundation for Haiti.The foundation provides health care and education and was started by the Rev. Rick Frechette, an American priest, doctor and recipient of the $1 million Opus prize that rewards faith-based entrepreneurship.

Frechette visited the Mayo Clinic Hospital in Phoenix within the last year and sought out Humphreys for his particular brand of expertise — urology.

Haitian men are dying of enlarged prostates, which can be treated in the U.S. with medication and treatment before resulting in kidney failure. Humpreys performs HoLEP, or holmium laser prostate surgery, to remove enlarged prostate tissue and improve urine flow. Complications are rare in the one-time procedure, which serves as a permanent solution. Mayo is one of less than two dozen U.S. institutions that perform this and does about 280 a year, Humphreys said.

Humpreys secured more than $350,000 in donated or borrowed medical equipment and supplies to take to Haiti.

Humphreys prepped and screened patients over the last week so he can return later in the fall to perform the laser surgery.

“We’re hoping to make this an ongoing endeavor. We want to continue building this relationship with St. Luke,” he said.

Mayo’s hospitals in Phoenix and Rochester, Minn., have a formal and ongoing relationship with the St. Luke Foundation for Haiti. While this trip is independent, the sustained presence of Mayo doctors makes it easy to get a lot done in a week’s visit, said Wynn Walent, the foundation’s assistant national director.

“We tend to stay away from folks just coming to provide care and that’s it,” Walent said. “It doesn’t work well with our model and system. Our goal is to always look into something that can turn into a long-term thing.”

Mayo physician Bhavesh Patel is traveling back to Haiti after several visits and has become a St. Luke Foundation ambassador.

Patel performed general and hernia surgeries for the St. Luke Foundation’s hospitals, which he describes as a roll-up-the-sleeves endeavor with everyone unloading trucks and carrying supplies as the sun comes up and goes down.

Patel said it’s not just the need that keeps him returning to Haiti.

“There’s a fulfillment of that need for sure, but once you get engaged with the people there, they become your friends,” he said.

While Mayo Clinic Hospital is known worldwide for advanced care, Patel said health volunteers are better served by noting what their Haitian counterparts are already accomplishing.

“It’s important to understand how they do what they do and how they sustain themselves year after year while taking care of their brothers who are sick and dying without adequate tools,” Patel said.

“Only 50 miles from them is the best care in the world in Miami.

“Yet it’s a humbling thing to recognize as volunteers that they are people first, trying to care for other people.”

Walent said that’s not easy for visiting foreigners who believe they can solve problems quickly in Haiti.

“Things are actually very nuanced and complicated here,” he said. “It’s not every foreign group that I end up raving about like the folks with Mayo. I’m struck by their willingness to listen and learn.”