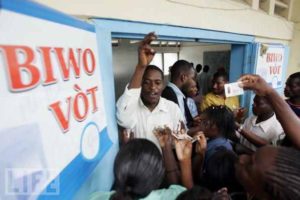 PORT-AU-PRINCE, Haiti, Nov. 26 (UPI) — Many of the million-plus Haitians now living in tent cities months after the devastating earthquake may be no-shows at the presidential election Sunday.

Many do not know which polling places to use, Voice of America reports, and others lost their identification along with their homes when the temblor struck in January. Some, like Guerrier Accene, are cynical about the election.

“When the politicians need you, it is only to help them win an election and get into office,” he said.

The camps are one of the most difficult problems facing the winner of the election.

“The first thing I want to see fixed is for the new government to move people from tents into real homes. There is so much misery in the tent camps,” Elexcema Okinel said.

The candidates, trying to woo voters at home, are also appealing to expatriate Haitians in the United States. The group, 800,000 strong, is barred from voting but has become a major source of funds for the 19 presidential candidates.

This month, a few candidates held a debate in Miami and held a straw poll among Haitian-Americans in Florida.

Just remember 2005, when the CEP finally said, anyone can vote anywhere.

Celestin’s 2010 campaign has used a hundred, or so government buses, paying people to attend his rallies around the nation. He can use the same principle to swamp the polling station. 100 buses with 50 people in a bus can make a big difference in a 12 hour day.

And there are not enough observers to protect a small candy store from shoplifters.