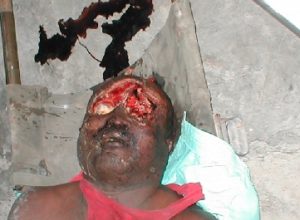 December 16, 2015
On December 16, 1990, Jean-Bertrand Aristide claimed 67% of the 347,234 votes cast, from a population based of some 9,000,000. The fact that he was declared president, with less than one percent of the votes counted shouldn’t matter. The fact that Evans Paul put the mob on the streets at 11 AM – well before the 6 PM poll closing time, as the French embassy – using their illegal FM transmitter – declared Aristide the winner.
Anyone disputing this claim was killed.
And so Haiti launched upon a journey through violence, corruption and cocaine trafficking that would set the Nation back in its effort to find democracy.
Today, some 25 years later, some endeavor to light the fires again, bringing the shadow of Aristide back to power. His millions fund the ongoing project to destabilize the government and create chaos and disorder, two elements required for Lavalas to succeed.
A demonstration march started at 10 AM this morning with fewer than a thousand people at the launch point. The march wound its way through many districts before ending in front of the National Palace. It hadn’t grown in size and fewer that 1,000 answered the call.
People must remember the past to protect the future.
So it is with today’s march.
Remember the past and all of the people murdered and kidnapped.
Remember the dozens who were necklaced.
Protect the future.

1 thought on “DECEMBER 16, 1990 INITIATED LONG BLOODY YEARS OF LAVALAS GOVERNMENT INITIATED BY ARISTIDE AND CONTINUED BY PREVAL – THOUSANDS MURDERED DURING THESE REGIMES”