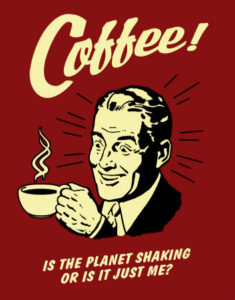 Todd Carmichael of Dangerous Grounds is a coffee expert, thrill seeker and philanthropist. He travels to Haiti to investigate the dangerous world of coffee growers. The world of coffee is a $60B industry second only to oil as a high demand commodity.

Over 200 years ago, Haiti was the second largest producer of coffee in the world. The original coffee beans came from Africa and sells for as much as $30/pound.

Haiti is considered a category 5 on the national danger scale. Five is the most dangerous and Todd equates it to Somalia. He heads into the market to look for the prized green coffee but only finds inferior beans. He buys a couple of pounds as to not insult the locals. Then, things get a little out of control. Todd and the cameraman are surrounded by local thugs. They make a break for it and run to the police station where they find a moment of reprieve.

In the sewer area next to the police station, pigs are swimming trying to stay cool and looking for food. He meets up with his local contact and tells him that he wants to cut out the middleman and buy direct from the coffee farmer. The contact says he’s going to war. He’d better purchase a bulletproof vest.

Todd is worried about running into the “president.” He controls the area where the coffee beans are grown. He gets a cut out of every purchase and Todd wants to cut him out.

Rebo, a guy he had met previously, comes to help him and brings a working vehicle. An exchange of money occurs and he’s ready to go up the mountain some more. He finds a field and a house. A dude has been watching him and is carrying a machete. He tells machete man that he’s filming and looking for the green coffee. He gets directions to the fields he’s looking for.

He finds the coffee he’s looking for but the farmer will not sell direct to Todd. The farmer tells Todd that the whole mountain is already taken and he should leave now, but the day is over and it’s too dark to drive out of the town. They sleep under the car and disconnect the battery so no one can hot wire the car.

The next morning they go scouting again. Todd finds the perfect bean. He looks for the owner of the plantation and finds an old Haitian man and he’s willing to sell to Todd. Todd samples the product and loves it. He buys 19 sacks of coffee. Each sack contains over 100 pounds of coffee beans retailing for $75,000.

He comes back to Philadelphia and roasts the green coffee for his coffee company, La Colombe Torrefaction. The coffee is a hit!