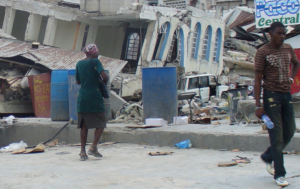 Drove past our office location for the first time and saw the pile of rubble that was once a three story building. There is no recognizable structure. Just a pile of debris in small component pieces. 32 MINUSTAH people were laid to rest beneath this impenetrable mass, to be retrieved at some later date.

Perhaps they will simply put a bronze plaque on the mass, and leave them there.

Yesterday I visited MISSION OF HOPE on National Route 1 between Port-au-Prince and St Marc.  This is a massive operation that serves a large community. They serve tens of thousands of meals per day, accounting for a total in excess of that claimed by the World Food Program    its press releases.

The MISSION operates with dozens of foreign volunteers, skilled and unskilled, who donate their time to help the peasant population.

MISSION of HOPE’s hospital is the third best in Haiti, ranking behind the American boat off Port-au-Prince and the University of Miami project in the capital. To date, unlike other facilities, the MISSION of HOPE has yet to amputate a single arm or leg. Their volunteer orthopedic surgeons work to save the people’s future, while many other amputate and effectively cut short their patient’s life since a cripple cannot survive in this society.

Workers there commented upon the fact Preval’s government and the UN were holding up supplies. Preval and the UN are working hand-in-hand to maintain Preval in power. It is in the UN’s best interests to do so, and is not in the Haitian People’s best interests. Unfortunately, the UN is not interested in the people. The UN is only interested in building its own empire and generating massive amounts of funding.

Check out their website and do whatever you can to help these people.

On the other hand, Preval was blocked on his concept to freeze emergency supplies and distribute only through the candidate from his political party – UNITE – in a bold effort to win this year’s elections.

It was so blatant an attempt that Preval was forced to adopt a more subtle approach. With the disintegration of Parliament, as an immediate element in Haiti’s day-to-day life, Preval has decided to distribute all relief supplies through his mayors.

This may seem like a reasonable idea until you hear how it will work. Preval has sent three enforcers to be with each mayor. These people have cash, plus actual control of all relief supplies. If someone does not comply with their wishes they will not get help.

In this way, Preval still puts the support behind his UNITE candidates.

The Quake has been a screen for silent, discreet removal of opponents. In one scenario, a Preval hit-man was eliminated. This guy was an ex-member of CIMO, Haiti’s American-trained SWAT team. He was protected by Preval gang-leader Boukman and is said to have killed at least 20 PNH police officers, on Preval’s orders, plus countless others.  PNH officer caught him with a stolen car. He got out, smiling and saying…”Call Boukman..”

A police officer drew his pistol and said….”Call God…” Two shots placed  the ex-CIMO man in direct communication with Heaven or Hell.

Of course, American civil liberties representatives will scream about this – and other – extrajudicial execution, but what is the alternative. If Preval was allowed to intervene, the killer would be on the streets again.

On the other side of the coin, a   who could have led a massive student demonstration, the day after the Quake, was shot and killed at his school. By doing this, Preval effectively derailed what could have mushroomed into a street demonstration that would have collapsed his Presidency.

The demonstration could be restarted within the next couple of days.

US Representative Maxine Waters met with a group of Haitians last night.  She was stunned to see that Haiti was in the state it is. She said that Washington believed Haiti was/is the perfect place what with the United Nations in place and Rene Preval as President. Much of this myth is due to the actions of Michelle Montas, wife of slain Jean Dominique, the well known Haitian journalist who was killed, in 2000, with Rene Preval’s complicity.

Whether or not anyone does anything….remains to be seen.

Preval is pressing to open the schools – no matter what the efficiency might be. He will open them in name only to show the world community that he is making progress where, in fact he is sliding backwards.

We have a small girl who is about to lose her leg to infection. The foreign butchers have already cut of her sister’s arms, leaving her a living breathing disaster. Perhaps the MISSION of HOPE will save another life.

I will let you know.

Preval is still moving forward with the plan to move 400,000 people into the countryside with absolutely no preparation for their housing, sanitary facilities, feeding or housing. The Minister of the Interior Bien Aime is an incompetent, in normal dysfunctional Haitian times. He is a potential mass murderer with his relocation plans – in our disorganized situation of today. There is no government. There is no infrastructure in Port-au-Prince. Why would assume there will be any of these necessities in a distant open field outside of the capital??

Profiteers are pushing the prices up each day…on the street markets and in the stores.

Any move against Preval will require the support of the business community but there are not likely to move against the President. They would rather maintain him in power – so they can continue to make their money – than to help the massive majority….. trapped in its poverty.

If this condition prevails, the ultimate explosion – that could be avoided today – will wipe them out, physically and economically.

Greed will finally kill off this sector of society to which it takes so much and contributes so little.

Never in the history of human conflict  have so few taken so much from so many.

The bourgeoisie – business community  will eventually pay for their disinterest in their Nation’s well-being, and that of its People.