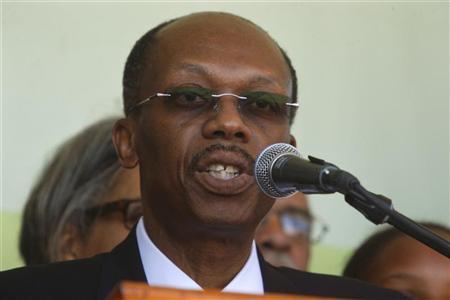 (Reuters) – Former Haitian President Jean-Bertrand Aristide on Thursday won a delay until next week in a court hearing to address accusations he exploited former street children for political gain.

Aristide, who did not appear in court, has not been charged with a crime and a judge will ultimately decide whether any charges should be filed. His lawyer successfully argued that the hearing should be delayed to next Wednesday because the court summons was served improperly.

Police used tear gas to avert a confrontation between pro- and anti-Aristide demonstrators outside the courthouse.

A complaint against Aristide was filed by a small group of people who said they were former street children rescued by Fanmi se Lavi, an organisation Aristide created in the late 1980s to house and educate such children. They said they were physically abused and were used to raise donations to further Aristide’s political career.

About a dozen people saying they were former street children protested outside the courthouse on Thursday.

“I was 6 when Aristide took me from my mother’s house,” said Sony Telusma, 32. “With the other children from Fanmi se Lavi, he was using me as a puppet, making us play in front of foreigners in order to raise money for his own political interest.”

Telusma said the children could not file a complaint earlier “as we were just kids, had no maturity. And also, one should not forget that Aristide was in power. He was the one who was controlling everything. Misery has made things clear for us. We are asking for justice and reparation.”

From the other side of the street, dozens of supporters of the political party founded by Aristide, Fanmi Lavalas, sang and waved portraits of the former president.

Haitian police, assisted by a few U.N. soldiers, kept the two groups from clashing. But as the pro-Aristide group became too big to contain, the police used tear gas to hold back the crowd and hastily evacuated the former street children in a police truck.

Aristide, a former Roman Catholic priest, first became president of the impoverished Caribbean nation in 1991 and was ousted by former soldiers in 2004, before the end of his second term. He returned to Haiti last year after seven years in exile in South Africa.

He has not spoken publicly about the accusations involving Fanmi se Lavi.

Mario Joseph, a lawyer representing Aristide, came to court to explain why the former president did not attend.

“We are not avoiding the law. Jean-Bertrand Aristide is a citizen. When the procedure is going to be correct, we’ll come again. We only received the order to come in court on Wednesday morning, but January 2 is a holiday,” he said.

The chief prosecutor, Lucmane Delile, set a new hearing for next week.