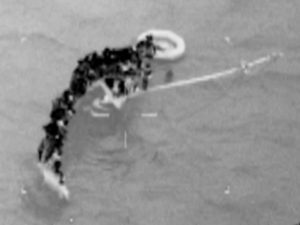 U.S. Coast Guard and Bahamian officials say a search and recovery operation will resume Wednesday for “an undetermined number” of Haitian migrants feared dead after their wooden sailboat ran aground and overturned off the coast of the Bahamas.

At the same time, crews hope to rescue a second group of stranded Haitians who were spotted Tuesday on Ragged Island, also in the Bahamas. The island is about 90 miles south of where crews were scrambling to recover the bodies of Haitian migrants near Harvey Cay.

The simultaneous Haitian migrant smuggling operations have become common lately as Bahamian and U.S. officials report an increase of undocumented Haitians trying to enter the United States. On Nov. 12, one U.S. Coast Guard crew rescued 171 Haitians from a 40-foot sailboat in Bahamian waters as another crew rescued 68 migrants off the coast of Haiti.

The bodies of at least 30 Haitians were recovered Tuesday by U.S. Coast Guard and 100 rescued from their 40-foot capsized sloop. The group was severely dehydrated and was taken to New Providence.

Haiti’s ambassador to the Bahamas traveled to meet the migrant survivors after midnight on Wednesday.

The boat, which left from Isle Latortue in northwest Haiti, t flipped sometime overnight Monday near Harvey Cay in the Exuma chain, about 200 miles southeast of Miami. Crews initially recovered the bodies of three Haitians and brought 13 survivors to shore by midday, said Lt. Origin Deleveaux of the Royal Bahamas Defense Force.

He said authorities didn’t know how many perished and were still searching for “an undetermined amount.”

A source familiar with the search and rescue told the Miami Herald that the events began on Friday after a fisherman reported spotting a Haitian-style fishing boats in Bahamian waters. Royal Bahamas Defense Force officers spent the weekend unsuccessfully searching for the boat. A tip then led police to Twin Cay where six Haitian men were spotted waving for help.

Bahamian Police Superintendent Macktavaus Daniels said the men told his officers that they were aboard a boat that overturned nearby. U.S. Coast Guard and the Royal Bahamas Defense Force were soon deployed. A defense force crew reached the boat in shallow water early Tuesday morning.

Strong winds may have played a role in the boat capsizing after running up a bank and could hamper Wednesday’s recovery efforts, defence force officials said.

A marine forecast for the central Bahamas warned boaters to remain in port Monday “due to hazardous seas and … dangerous rip currents.” A small-craft advisory was in effect, with wind gusts reaching gale-force levels and waves swelling above 12 feet.

Because the boat left Haiti on Nov. 18 and the water was three to five feet high, officials said they believed that the Haitians died from dehydration and starvation.

It was the second time in recent weeks that the Coast Guard has responded to a fatal boating incident involving Haitian migrants.

Four Haitian women died when the 25-foot fishing boat in which they were being smuggled capsized seven miles off Miami Beach on Oct. 16. Several non-Haitians have been charged in that case, including murder charges against the boat’s Bahamian captain and his Jamaican assistant.

Authorities have noticed an increase in the number of smuggler-operated boats bringing undocumented migrants from various countries other than Cuba to South Florida in the past three years.

Meanwhile, Bahamian officials say 1,550 Haitian migrants have been received or intercepted by authorities in the Bahamas this year, already surpassing last year’s total of 1,477

Haiti has been rocked by political uncertainty over delayed legislative and local elections, and rising cost of living.

An anti-government protest last week against President Michel Martelly and Prime Minister Laurent Lamothe was one of the largest to date, with more than 5,000 protesters in Port-au-Prince demanding Martelly’s resignation. Police shut down an equally vociferous protest in Cap-Haitian by using tear gas on protesters. Another protest is planned for Friday.

Many smuggling voyages toward South Florida originate in Bahamas, carrying migrants from as far away as Brazil, Ecuador and Colombia. Some of the migrants also start out in Haiti or the Dominican Republic, making their way to the Bahamas to board smuggling boats for the final leg to Florida.

In some cases, small boats overloaded with migrants begin their trips in Haiti. That was the case in the fatal voyage that ended Oct. 16 off Miami’s Government Cut. The boat carried 15 migrants, some of whom started in the northwestern Haitian coastal city of Port-de-Paix, one of the survivors told the Miami Herald.